MICHAEL Owen feels his career in being seated can continue at the highest level after leaving Manchester United. His posture is flawless

The collapsible striker was released by the club after caretakers were doing a closed season clearout at Old Trafford and noticed him in the corner of a storage cupboard gingerly massaging the back of his thigh.

Owen said: I still take a keen interest in the game and from what Ive seen from the television in my living room, theres Premier League benches out there I think I could definitely sit on whilst looking at my iPhone and wearing a big Puffa jacket.

Im fairly young at 32 – my right leg is still only a toddler – but Im not ready to drop a division as most of their benches arent heated and the cold would absolutely cripple me.

Owen will launch MickeyTV, a new channel in the high 800s of the Sky box, via which he will encourage managers to call in and make a bid until he is signed.

The channel will feature soft ­focus footage of him getting off a coach, sitting on a bench, running up and down a touchline a few times, sitting back down on a bench and getting on a coach, to show managers what they could be getting.

Sofa manufacturers DFS are believed to have approached Owen about a sponsorship deal, and Anusol have also shown an interest.

But Owen said: Although I’ve been concentrating on my sitting, my heart is still in playing football, and I cant wait to get back out there and battle against great defenders like Tony Adams and Marcel Desailly. 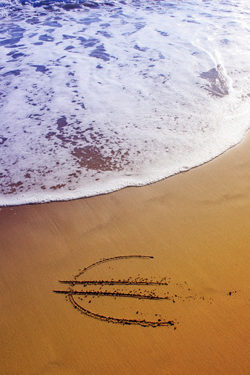 EURO banknotes are dissolving into thin air at the touch of the sun as if they were never real. What is this strange symbol?

Across the continent, 100 Euro notes turned into rectangles of blank paper in wallets, 50 Euro notes crumbled like ash when touched and 500 Euro notes melted into twinkling golden lights which blow in the wind.

Jacques Vernet, manager of the Société Générale bank in Paris, said: My clerks opened their cash drawers and the Euros fluttered upwards like beautiful butterflies, disintegrating in shafts of sunlight.

I rushed to the vault but there was nothing left but a blinding luminescence. I heard a woman’s voice whisper ‘au revoir,’ gently into my ear, and when I opened my eyes the vault was empty.

Herman Van Rompuy, President of the European Council, told members: I saw a case of banknotes turned into golden leaves. I saw a handful of coins turned into iridescent pebbles that made a sound like music as they fell to the floor.

Could it be that the single currency we believed in for so long was just a dream? Just a wonderful, wonderful dream?

German financier Hans Gruber said: I stared at my 20-Euro note as the colours and lines on it writhed around like a thing alive, never the same twice, until it turned into an old Reichsmark note bearing the face of Hitler.