Up yours, BBC tells Ferguson

MATCH of the Day producers have welcomed the opportunity to completely ignore Sir Alex Ferguson. The 70 year-old Manchester United manager has ended his seven year dummy spit with the BBC, which began after they produced a documentary untainted by business or political influence, in keeping with Ferguson’s unshakeable left-wing beliefs.

The documentary suggested that Ferguson’s son may not have been the living incarnation of Zeus and that football agents were possibly not the Platonic ideal of probity and honesty.

This made the never-ending fountain of radge ban any mention of the BBC at Old Trafford and led to the transfer of Cristiano Ronaldo after the Portuguese striker hinted he was a big fan of Cash in The Attic.

Producer Tom Logan said: “We’ll approach him after the Arsenal match and then, as he’s getting into why the whole world’s against him – which usually takes  about four seconds – the interviewer will just walk away. At which point Ferguson’s head should explode in a pink mist of fury.

“It’s important we do this as I think that, while the BBC has many faults, kowtowing to the capricious whims of a jumped-up PE teacher shouldn’t be one of them.”

The technical team at MOTD will also join in by removing Ferguson from footage of United games and replacing his image with a photo of Jose Mourinho to ensure maximum Glaswegian profanity.

Logan added: “As a parent I know the value of ignoring a tantrum, even a seven-year-long one, and if it means having to endure Ferguson drumming his fists on the floor and deliberately shitting himself during Sports Personality of the Year to make our point, I think it will be worth it.” 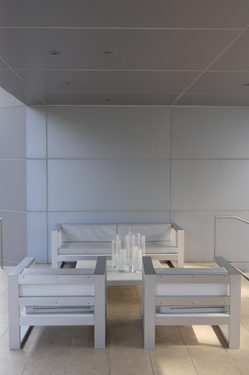 It's a cool, but comfortable space for cursing the imperialist dogs

The Libyan despot’s classy interiors are at odds with what is normally expected from a dictator, with understated furnishings and clean, contemporary lines.

It had been believed that all tyrants furnished their homes from the same shop full of Ming-dynasty-on-crack gold things and fantasy art. It is based at a secret location somewhere beneath the Arabian peninsula and is also a favourite of Donald Trump and the Rooneys.

A rebel spokesman said: “Although this is a glorious day, we feel a bit cheated that Gaddafi’s eye for good design is beyond reproach.

“Usually when a despot falls the first thing that happens is the Western media prints lots of pictures of all their gaudy palaces, with suitably withering captions.

“Because it is only through the medium of tasteless interior design choices that middle class Western newspaper readers can begin to grasp that a foreign leader is a bad person.

“Here however we see that, although Gaddafi may be the son of a jackal, he has created a home which is simultaneously grand and intimate, making excellent use of natural light. So reluctantly we must give credit where it’s due.

“When we capture him I fully intend to find out where he got those rugs in the torture wing chill-out zone.”

Interiors expert Emma Bradford said: “If you’re one of the oppressed masses, is it more galling if your oppressor spends stolen money on a giant platinum statue of Conan fighting a crocosaurus, or really nice stuff that you’re actually quite jealous of?

“Then again, who cares? That sofa is lush.”