IN a bold, modernising step the Church of England is to offer couples a voodoo water ceremony to protect their bastard offspring from the horned one.

Couples who are getting married in church will be offered a baptism for any children that may have been produced by frenzied bouts of demonic pre-marital rutting, probably from behind.

A CofE spokesman said: "We have to recognise that in the modern world an increasing number of children are vulnerable to Beelzebub until we've soaked their head in some tap water that we've waved our hands at.

"And of course children born outside of wedlock are in even greater danger because Jesus was not there to help daddy put his thingy in mummy's doo-da.

"But if we can at least throw some water at their head when their mummy and daddy are getting married then hopefully they will only be half-possessed by one of the minor demons."

He added: "You can have your entire family unit protected from the Dark Lord and his army of goblins for only £272 + VAT and we'll even throw in a bottle of Diet Fanta and a family-size portion of nachos."

Bride-to-be Emma Bradford, from Stevenage, said: "I'm so relieved that we can have both our marriage and our bastards approved by the baby Jesus.

"In a way it's kind of an apology to God for getting up the duff after swapping my knickers for a bag of chips on the way home from the pub."

She added: "Come to think of it, Joseph was only Jesus's step-dad and I don't remember anything in the bible about the Virgin Mary getting married to God, and if she did then she would have been a bigamist, which is surely worse than my aforementioned chip-induced knicker removal.

"Maybe I should say something to the vicar."

Antichrist Is Great, Says Man Who Hasn't Seen It 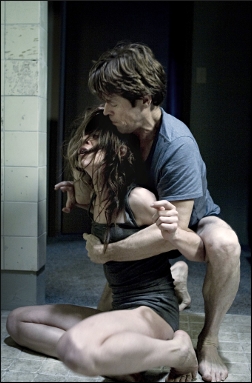 LARS Von Trier's sexually-explicit horror film Antichrist is brilliant and is being attacked by people who probably haven't even seen it, according to a man who hasn't seen it.

Film critic Dan Hodgkinson, of purelyhypotheticalfilmnews.com, has been enraptured by the film since not seeing it several days ago.

Writing on his website, he said: "There's loads of scary stuff in some woods, talking foxes and shit like that. Quite a bit of boobage.

"It's all spooky for a bit and then this massive dinosaur turns up and starts having a fight with a giant moth. Then Willem Dafoe and Charlotte Gainsbourg go all batshit and turn into a pair of giant robot with bazookas for arms."

He added: "The cast are all brilliant, particularly the little guy from Diff'rent Strokes who plays an evil badger.

"It is worth bearing in mind that I haven't actually seen it. But I've given this a bunch of thought, and that's more or less what it's like."

Hodgkinson's comments come in a week when a number of other critics who haven't seen the film were disgusted by it.

Daily Mail critic Marcus Phillips said: "I was actually physically sick while sitting at home during the press screening.

"It simply beggars belief that Lars Von Trier should be allowed to make me imagine the kind of sick, kinky, Satanic images of coquettish, doe-eyed young girls defiling themselves with bits of shrub that fill my mind when I think about what this film's probably like."

He added: "If you'll excuse me, I must nip to the bathroom."