Dear Holly,
Being so jaw-droppingly gorgeous is such hard work, why do the public have to persecute me for it? You’d think that by shining the light of my staggering beauty into the lives of the ugly trolls that surround me, I’d be admired and celebrated, but all I get is hatred. Why are people so cruel?
Samantha Brick

Dear Samantha,
Just be grateful we’re not still living in the 1970s when Jesus was alive, because there’s no doubt you would have been crucified by a baying mob. Back then, Jesus was pioneering the handsome bearded librarian look which is still a favourite with students and hippies everywhere; but in Jesus’ day, it was pretty radical for men to be anything other than clean shaven. John Lennon was another one who let his hair grow long and look what happened to him. So-called ‘real’ men shaved their heads, wore donkey jackets, listened to Dexy’s Midnight Runners and worked in the mines. They protested violently when Margaret Thatcher tried to pass a law that allowed men to go the hairdressers, and cowardly fops like Laurence Lewellyn-Bowen had to go underground for fear of their lives. But Jesus wasn’t scared to stand up for his right to sport a dandy quiff, and sacrificed himself for the cause. Thankfully, he had time to invent the Easter egg before they finally came for him.
Hope that helps!
Holly 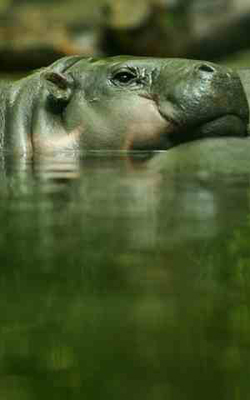 A PYGMY hippo calf is using mind powers to exert a malevolent hold on those around him, it has been claimed.

21lb Harold, who lives in a Dundee zoo, was hailed as a miracle after he was abandoned by his mother and successfully raised in captivity.

But it soon became apparent that something was wrong when zoo staff began to die in mysterious accidents.

Keeper Tom Logan said: “It was an assistant keeper who first warned me there was something strange about Harold, shortly after which he walked into the bear enclosure in an apparent act of suicide.

“Another worker who would sometimes goad the little hippo with a hose stabbed himself in the throat with a rake.

“The realisation came when I was cuddling Harold and looking into his big black gloopy eyes. I heard this voice in my head saying, ‘kill Jenny, split her head with a rock, get the keys to the food cupboard.’

“I was powerless to resist. Luckily Jenny, the other keeper, fought back and cut my hand off with the big knife she uses to chop Harold’s bananas, causing me to drop the rock.

“That little hippo is pure evil. It will destroy us all.”

However other members of zoo staff have denied that there is anything strange about the seemingly adorable herbivore.

“Go now. Do not return. This zoo is closed forever.”