London bus is against penises but also reminiscent of one. 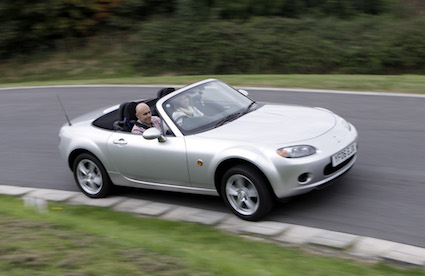 OWNERS of Mazda’s popular affordable roadster are certain they attract admiring glances, it has been claimed.

As the weather improves, the reasonably-priced sports car containing balding men and their wives is once again ubiquitous on UK roads. And according to research 94 percent of Mx-5 drivers would describe themselves as ‘cool’.

“However I imagine the man who played the put-upon husband in 90s BBC sitcom Keeping Up Appearances might be a fan.”

He added: “The Mx-5 says of the driver, ‘I am a maverick who plays by his own rules’ and also, ‘I am sensible enough to appreciate a vehicle with low running costs and reasonably-priced insurance’.”

46-year-old Mx-5 owner Tom Logan said: “It hasn’t exactly cured my mild erectile dysfunction but it has compensated for it.

“Driving it makes me feel like a 60s secret agent, albeit a relatively junior one on a modest pay grade.”