Jamie’s Quantum of Sausage sees Bond facing the twin challenges of avenging the death of his old mentor at the hands of a Russian billionaire, whilst simultaneously organising an informal garden party for between 10-30 guests.

But Bond’s menu plans hit an unexpected obstacle when it emerges the six of the group are vegetarians, one of whom has a gluten allergy.

Publisher Nathan Muir said: “People say our industry is in a moribund state where the only books to get published are those featuring an established character, or those written by a celebrity, preferably one who is also a chef.

“This book proves them absolutely right, however I have earned double your month’s salary while saying this sentence.”

The story opens with the spy in Serbia on the trail of a rogue agent. Stopping at a nearby primary school, Bond is shocked at the poor quality and limited nutritional value afforded by traditional school meals, and takes six weeks off from his mission to educate parents and children in tasty yet nutritious lunchtime snacks.

He then kills a man with a spatula, recites 120 pages of recipes for no reason, and says ‘pukka’ before leaving on a battered moped.

Jamie’s Quantum of Sausage also features a guest appearance by Nigella Lawson as a beautiful-but-deadly oligarch’s wife with the unfortunate habit of spilling warm, liquid ingredients down her cleavage. 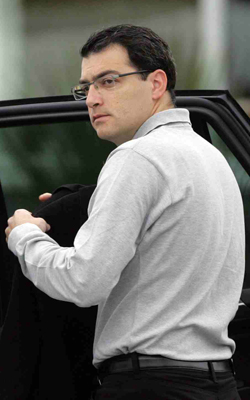 DAMIEN Comolli has resigned from his post of chief moneyburner at Liverpool FC after winning $40 million via email.

To prove his former occupation he has provided the Nigerian prince running the lottery with Liverpool’s bank details and has posted the deeds to his house as proof of address.

Football’s biggest spendthrift will set up a company with the proceeds, investing in new business opportunities such as harvesting icebergs for bottled water and research into magic beans.

Comolli said: “The board very generously offered to exchange my tiny payoff cheque for this big bag of shiny copper coins so I’m all set to go.

“I want to thank everyone at Liverpool for the opportunity to make so many people happy, especially managers of other clubs I used to visit with a cheque book in one hand and a drawing of a footballer in the other.”

During his time at Liverpool Comolli oversaw some of the biggest transfers in the club’s history, including the £35M paid to Newcastle for Andy Carroll despite the club’s insistence that they only wanted £1M for him.

He was known as an innovator at the club, with his ‘Bring & Buy’ scheme – where other clubs would bring the players they didn’t want to the car park at Anfield and Comolli would buy them – being responsible for Jordan Henderson.

Comolli said: “Leaving all this behind does bring a tear to my eye, although that could be the £300 aftershave I bought on the way to work off a chap selling stuff out of a suitcase.”