NEWS that John Terry is fully fit has blown David Bowie’s comeback out of the water.

Bowie’s team had spent months secretly recording his first material in ten years and assumed it would be a media sensation.

However, they had reckoned without the news that John Terry had finally won his battle with fitness and was set to retake his place in the Chelsea back four.

To date, Bowie’s new single Where Are We Now? has been downloaded just 48 times, a victim of what cultural commentators have called “The Terry factor”.

Media analyst Julian Cook said: “David Bowie always had a keen sense of the ‘zeitgeist’, but clearly he’s spent too much time in that Swiss chateau of his and failed to understand the national mood of Terrymania.

“I personally like David Bowie, but I fucking love John Terry.”

However, other believe that this was a publicity stunt gone wrong.

John Terry biographer Roy Hobbs said: “It’s my belief that Bowie knew Terry would be fit around now and deliberately tried to get on board his bandwagon.

“Well, this is his biggest misjudgment since the Tin Machine tour. I think we’ll be hearing very little about David Bowie in the days and weeks to come, or any time after.” 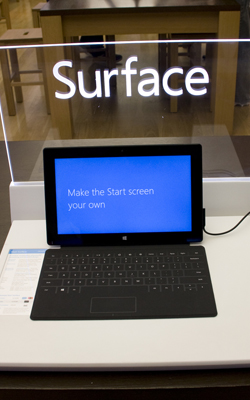 YOU don’t have to worry about anyone wanting to steal your Microsoft tablet, the corporation has claimed.

After thieves entered Microsoft’s California development centre and stole only Apple products, executives hailed the event as a milestone in ‘theft proof’ computing.

A Microsoft spokesman said: “That’s always been our biggest challenge – designing a computer nobody would want to steal. It’s why we’ve made them look like that.

“To test our products, we deliberately left the fire escape open and sent a round robin email to all the crackheads in a 30 mile radius.

“We’re proud to say they didn’t even think about stealing a Microsoft Surface.

“However they did take an iPad belonging to the only cool person in the office, Jeff, who’s into music and girls.

“He’s such an idiot for buying one of those things.”

Crack-addicted petty thief Tom Logan said: “I will steal most things to fuel my drug addiction, but where Microsoft stuff is concerned my aesthetic sensibilities kick in.

“They’re OK I suppose, but somehow not the sort out thing you want other people to see you jumping out of a window with. However now I understand that’s all deliberate, so it’s quite clever really.

“Still, Microsoft might want to change their logo from just writing ‘Microsoft’ in a 90s font. I mean I’m not a design guy, I’m a crackhead, but it’s a thought.”