Cowell To Last As Long As The Universe

SIMON Cowell will last as long as the universe contains beings with television sets and money, it was confirmed yesterday.

The freak-wrangling waistband was heard across the country as he cackled in victory atop his 1,000-foot high throne constructed from the skulls of unsuccessful contestants after signing a new TV deal.

Cowell said: “The hate is swelling in you now. Give in to your anger. With each passing moment you make yourself more my servant.”

The ITV contract is thought to be the biggest in evil television history since 1988, when Cilla Black demanded a million voices crying out in terror before being suddenly silenced in exchange for a third series of Blind Date.

The negotiations with Black prompted the creation of ITV’s All-Consuming Darkness Liaison Department, which also conducted the recent talks with Cowell in the desecrated grounds of an abandoned church on his country estate.

Asked whether he was concerned that such shows irrevocably altered the cultural DNA of the country to such an extent that future generations would be little more than hooting fleshpods pressing buttons on a screen to watch another fleshpod jump around on a stage, Cowell said: “Fuck you.”

He added: “Tell you what, if you want a vision of the future, imagine me sneering at a trembling council estate peon as they struggle through their version of The Greatest Love Of All on a loop that can never, ever end.”

In addition to  dedicated channel for Shit Factor and Britain Must Be Stopped, Cowell’s infinity year deal will see him front new talent series such as Fuck This Pig & Win A Ringtone and Dance While I Throw Jars of Hot Piss at You. 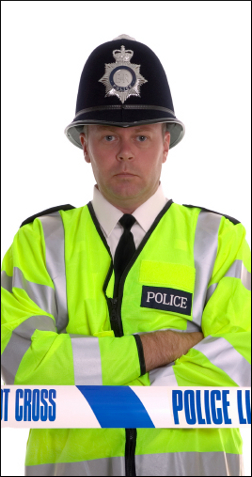 POLICE are stopping disproportionate numbers of ethnic minorities purely so that they can act ‘street’, it has emerged.

Figures from the Institute for Studies found that UK police are up to 26 times more likely to want to kick it with black people than whites.

Professor Henry Brubaker said: “It’s no secret that a large percentage of white police officers secretly long to be black. Many of them received daily bogwashes during their school career and are desperate to be accepted into what they think is the ‘cool gang’.

“At the very least they’d like to think they’re in The Wire, treading an exciting but dangerously fine line between the right and wrong side of the law, when really they’re mostly doing paperwork and cycling proficiency tests.”

Tom Logan, a plumber of West Indian extraction, was pulled over while travelling home from work. He said: “The officer asked me to come and sit in the police car. I thought maybe I had a brake light out.

“As we approached the car I noticed that dub reggae was playing on the stereo at considerable volume. The officer then produced what I initially assumed to be some sort of tampon, but was in fact a poorly-constructed cannabis joint.

“He told me we were going to have ‘creamy tokes on this sick blunt’ and asked me whether I preferred Ice Cube or another nineties rapper. It was extremely awkward.”

He added: “The officer said that although he currently only had a truncheon and a torch, he was about to get a ‘proper badman gun, seen’. I wasn’t sure how to respond, we just sort of sat there for a bit trying not to make eye contact.

“I’ve got two kids and shouldn’t be expected to tolerate this level of social queasiness.”

A police source said: “It’s an open secret in the police force that many officers think black people are cool. I’ve heard many white officers ending sentences with the word ‘seen’.

“Asians are targeted less because they’re considered to be not as good as rapping. And Welsh people are of no interest whatsoever.”