DAVID Attenborough has been embroiled in a row over the ethnic diversity of bears in BBC documentaries. The grizzly is a majestic motherfucker

As the veteran broadcaster’s latest polar bear series hits screens, members of the North American Ursine Brotherhood have called for a boycott of all BBC programs until an equal opportunities policy is implemented.

Tom Logan, a 650lb grizzly from Wyoming, said “What’s a grizzly got to do to get a film crew up in this woodland, bitch? I been dodging hunters and scoring pic-a-nic baskets like a motherfucker and the BBC ain’t been documenting shit.

“But the moment there’s some white bear on white bear violence it’s all over the news. My brown brothers have been dying in mating and territory wars for years but the polarcentric media don’t want to know.”

The BBC has denied the accusation of racism, claiming some of their best documentaries are about grizzlies and have accused Logan of ‘playing the species card’.

They have asked him to call off his planned demonstration, which would involve several dozen seven-foot grizzlies roaming the BBC’s offices in Manchester, following fears for the bears’ safety amongst locals.

Documentary producer Roy Hobbs said “I think the continued existence of the badger in Britain and the recent introduction of the pandas to Edinburgh Zoo shows a good record of black and white bear integration in this country. Really? I thought badgers were little bears?”

“Nevertheless, we might be at the point where the polar bear has jumped the shark. And yes, you’re absolutely right to think what an awesome film that would make.” 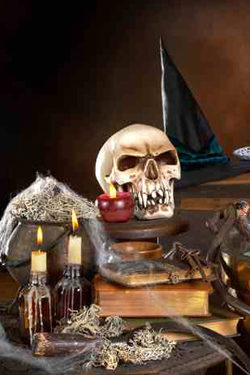 STUNNED archaeologists believe they have found the ancient former home of the notorious writer and sorceress Lizzie Jones. The interiors were said to have been designed by satan himself

The remains of the immensely eerie cottage, complete with mummified cats, a cauldron containing human male bones and a large collection of expensive shoes, were unearthed during a dig in Lancashire.

Archaeologist Emma Bradford said: Lizzie Jones was perhaps the most notorious of the Pendle witch-columnists.

By day, she would sit at her rough-hewn desk, cauldron bubbling softly in the background, and use a rook’s wing-bone dipped in dog blood to pen articles for popular gazettes. Her topics would include men, recent murders and fashion, as viewed through the dark prism of her witchy neuroses.

At night, local villagers believed she flew around the village, using weird fleshy membranes under her armpits as wings, entering any hovel that contained a virile male and doing unspeakable things to drain him of his vital fluids.

Then it was off home to cast a spell to make crops fail and cattle turn barren, and to suckle her feline familiars Charmion, Barbaris and Nebulon.

She added: The sad thing is that all Lizzie really wanted was to be loved. But she went about it the wrong way, and was burned at the stake.

Local legend has it that the Pendle witch-columnists were in thrall to the powerful warlock Dacre, a terrifying wild-haired hermit who believed himself the devil’s stepson.

Emma Bradford said: Witches could use fearful, dark things to manipulate the bovine ignorance of the masses.

We are fortunate to live in a more enlightened age.