THE classic hip hop track Summertime, which celebrates seasonal sunshine and happiness, is sounding like a cruel joke to UK radio listeners.

DJ Jazzy Jeff and The Fresh Prince’s uplifting 1991 hit made its annual return to daytime radio playlists as torrential wind and rain assailed the British Isles, leaving many convinced that the commercial rap duo are mocking them.

Housewife Helen Archer said: “I was listening to Will Smith say, ‘Seems like the summer’s a natural aphrodisiac’ when gale force winds sent my neighbour’s tree crashing through the living room window.

“If Jazzy Jeff and the Fresh Prince were here now I would slap them about their stupid faces until their noses bled.”

Meteorologist Emma Bradford said: “The Fresh Prince aka Will Smith describes an archetypal summer where ‘The weather is hot and the girls are dressing less’. Clearly he has never been to Trowbridge, where it’s chucking it down and everyone’s bent double against the punishing wind.

“Probably Jazzy Jeffy should do a new version called ‘Disappointing British Summertime’ where he and the Fresh Prince are unable to ‘chill’ and play basketball because of the driving rain.

“Instead they go to the nearest shopping centre where everything’s boarded up except for Cash Converters, then start punching each other through sheer boredom.”

Water vole has a massive go at heron 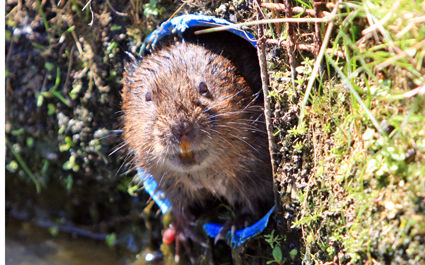 WATER voles are no longer taking shit off predators, it has emerged.

The almost-extinct rodents have made a surprise return to Britain’s riverbanks and are now unafraid to verbally abuse larger animals.

Last week amazed onlookers at a riverbank near Stoke-on-Trent watched as a tiny, damp vole reared up on its hind legs and repeatedly told a heron to go and fuck itself.

“The large bird looked terrified and actually muttered an apology before flying off.”

Vole Tom Logan said: “Every single day I go out looking for twigs, bulbs and other organic matter to eat. Just minding my own business.

“And every time, something tries to eat me. Mink, ferrets, eagles, owls, foxes, cats…the list goes on and on.

“I’d had enough. It was time to stop running.

“Seriously, I don’t mess with them. Do I? Do I? No I don’t. So what was with this fucking bullshit, every single day of my life. I don’t even taste good.”

He added: “Don’t just accept that you’re lower down the food chain. Stand up to predators, most of them are cowards anyway.

“Don’t let them push you around just because of the massive size disparity and sharp teeth. Seriously, I am ready to punch a fox.

“By the way, I don’t normally swear. Sorry about that.”