THE soaring number of office workers who choose to die at their desks is costing the UK economy Â£2.6bn a year, according to a new report.

Professor Henry Brubaker said: “Almost a quarter of office workers have had to cover for someone who has ceased to exist during office hours. Without clear guidelines we risk falling even further behind the Chinese who would not think twice about feasting on a dead colleague. Or a live one.”

Martin Bishop, a business consultant from Peterborough, was half way through an important client meeting last month when one of his co-workers decided to die.

He said: “At first I tried sneakily booting his shins under the desk to try and stop him going towards the light. Then, as everyone was shaking hands at the end I punched him five or six times in the chest as hard as I could. Everyone just went silent and stared at me.”

He added: “The clients left without saying a word, and I haven’t spoken to my colleague since. In fact, I think he’s still sat there but I’m not phoning an ambulance until I get some kind of apology.”

Kevin Reese, a call centre manager from Hatfield, said: “If you’re going to die at work make sure someone on your team knows about it in advance and for goodness sake don’t slink off to the toilets where your putrefying remains won’t be discovered until the height of summer.

“If I have to drag your pus-filled corpse into the lobby in the middle of a 30 degree heat wave, you can ask someone else for a reference.”

Britain Haunted By Thought Of Heston And Delia At It 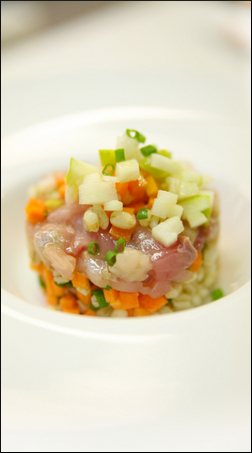 BROADCASTERS have been flooded by complaints from viewers unable to stop imagining Delia Smith and Heston Blumenthal going at it.

The ubiquitous Waitrose adverts, hinting at some form of depraved union between the two cooks, have triggered horrific images in the brains of millions of innocent consumers who had been minding their own business.

“The dark dreams come to me every night. I see Blumenthal smearing Delia in a semi-gaseous conceptual froth made from quails’ breath and robot tears.

“In my dream it’s the first time he’s seen a woman naked, he’s completely out of his depth and visibly horrified by her genitalia.

“I imagine Heston to have a long, chrome-plated member studded with LEDs, like some futuristic meat thermometer. Delia mocks it.”

He added: “These visions are now burned onto the retina of my mind’s eye and I shall be seeking compensation in the form of John Lewis vouchers.”

Keen amateur chef and television owner Nikki Hollis said: “I can’t help thinking it’d be like a shaven-headed version of Beaker from the Muppets rutting angrily with the female personification of chicken in a basket.”

A Waitrose spokesman said: “Heston and Delia are the Mulder and Scully of contemporary aspirational cuisine and their love will remain unconsummated for as long as you, the public, continue to purchase our tasty but expensive products.

“Unless of course you actually want them fucking on your telly? Thought not.”