'Flash! Flash! I Love You! But We've Only Got 14 Hours To Save Dobbies From Tom Hunter!'

DOBBIES the garden centre was in mortal danger last night after the launch of a hostile takeover by Emperor Tom Hunter of the Planet Mongo.

Hunter wants to use the £160 million acquisition as a strategic foothold in the burgeoning home improvement sector as well as a means of enslaving the entire population of Earth.

Dobbies, which is also Scotland's largest OAP drop-in centre, has been described by city analysts as 'humanity's last, best hope' against the forces of evil inter-planetary takeovers.

The all-conquering Hunter is one of the galaxy's most terrifying and merciless retailers.After a typical childhood in the Evil Imperial Household on Mongo, he set out, aged 14, to sell plimsoles from the back of a van in Ayrshire.

Thanks to a keen business acumen and regular deployment of War Rocket Ajax he was able to annihilate his competitors and build Sports Division into one of the biggest volleyball retailers in the west of Scotland.

He sold out to JJB Sports and returned to Mongo where he assumed the Imperial Throne and began plotting to take over the universe. His only respite from wickedness is the occasional game of tennis with ex-President Bill Clinton.

A spokesman for Hunter said: "The final piece is about to fall into place. Soon your annoying little planet will kneel before the Great Emperor and enjoy an even wider range of top quality patio furniture at frankly unbelievable prices." 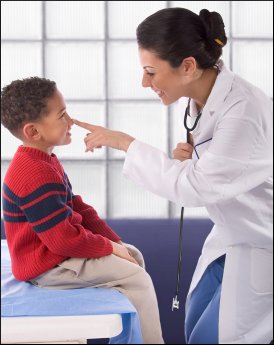 DOCTORS have better things to do than treat ill people, according to a new report from the British Medical Association.

The BMA says that every week more than 90% of Britain's doctors are forced to see unwell patients and try and make them better.

The association wants a new raft of legislation which will outlaw alcohol, vehicles, tobacco, television and all foodstuffs except cranberries and porridge.

As a first step doctors are demanding the right to hold consultations at their golf club, on their boat or in the back of their Jaguar while driving to the airport.

A BMA spokesman said: "Doctors' contracts make it clear that in exchange for completing their medical degree they will recieve £100,000 a year, no questions asked and any treatment they provide will be part of an elaborate tax scam.

"Too often doctors are being forced to work until mid-afternoon, telling fat people they eat too much, prescribing anti-depressants and beating smokers over the head with a big book."

He added: "These days most illnesses are caused by being poor. If more people made the effort to get a decent medical degree they would soon notice a significant improvement in their quality of life."