TOO many graduates have an insufficient knowledge of the psychosexual elements of the Alien films, industry leaders have warned.

Many employers believe not enough students are taking media studies degrees, leaving the UK lagging dangerously behind other nations in vital areas like being able to discuss The Goonies from an anarcho-dadaist perspective.

Denys Finch-Hatton, deputy chairman of Unilever, said: “Like many British companies, a lot of our business comes directly from media studies.

“Often a customer will ring up, anxious to understand the arcade game Ms Pacman from a contemporary feminist point of view, just because it’s really interesting.

“If whoever answers the phone can’t provide a convincing theory about how the ghosts in the maze represent an innate masculine fear of being sucked back into the mother’s vagina then we could lose their business.

“Too many students are being lured away from valuable subjects like Media Studies, Transgender Lizard Psychology and Kite Worship by more ‘glamorous’ courses like engineering and industrial Chinese.”

Media studies student, Martin Bishop, said: “Sure it’s a hard slog, but I know there’ll always be a job for me if I can convincingly apply queer theory to Thomas the Tank Engine. Well a job in Starbucks, at least.”

He added: “Starbuck is also the name of a character in Battlestar Galactica.

“Bit of media knowledge for you there. You can have that for free.”

Britain's teenagers herded into their pens 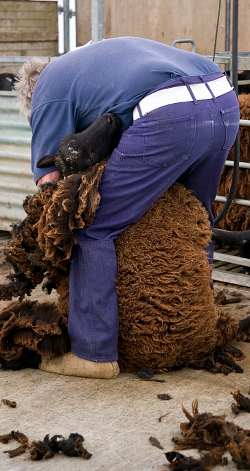 IN the midst of social strife Britain’s traditions endure as today the country celebrates the Great Annual Sifting of the Teenagers.

For generations families have congregated in their local market town to watch the wondrous spectacle of mass herds of young people being driven through the streets, before being graded, separated and shaved.

This year there is once again a record number of breeders competing for the university pens, despite warnings from teenage welfare charities that there is not enough room and that thousands of youngsters will end up with sores on their rumps from constantly rubbing against each other.

Emma Bradford, from Compassion in Teenage Farming, said: “We also think it’s time to end the practice of using a red hot iron to brand their foreheads. In Denmark, for instance, they super glue a barcode onto the inner thigh.”

Tom Logan, a potato salesman from rural Lincolnshire, said the Peterborough Sifting, one of the oldest in the country, was always a great day out for the family.

“We take a picnic and after we’ve toured the pens, we’ll sit on the grass and watch a puppet show about someone who gets a B and two Cs.”

Logan’s 10 year-old son, Robert, said: “I like it when one of them gets a bit spooked and tries to run in the opposite direction and then the career guidance cowboy hits it on the head with a frying pan and ties its legs together.”

Seven year-old Emily Logan, said: “First I want to go the geek pen and make them do long division in their heads and then I want to go to the KFC pen and throw coins at them.”

Tom Logan added: “For me the best thing about the sifting is just the privilege of being able to marvel at this wonder of nature. As long as you can stand the smell.

“Two years ago a 17 year-old shat its pants right in front of me. Would you like to see the photographs?”