THE ban on street brawling will be lifted temporarily for the royal wedding to allow celebratory fighting, it has been confirmed.

Pubs will also be open until 1am on the night of April 29, providing cheap, strong drinks to fuel a national outpouring of jubilant violence.

A Clarence House spokesman said: “Nothing is more emblematic of modern Britain than pints of nut brown ale and random acts of savagery, especially against strangers who happen to have a distinguishing feature, such as  a hat.

“The union of our future king and his live-in girlfriend is a wonderful opportunity for his loyal subjects to visit their favourite vertical drinking establishment, probably on some sort of leisure estate sandwiched between a cajun restaurant and a massive craft shop.

“The wedding will be shown on a large, wipe-clean kevlar screen that they can throw things at.

He added: “It’s going to be a wonderful day, whether you enjoy it in town or at home, hiding.”

Trainee plasterer, Wayne Hayes, said: “I’ll be treating it like a big
sporting event. I will pick a ‘side’, either William or Kate, for
entirely arbitrary reasons and then kick the fuck out of anyone who
disagrees with me.”

Architect Roy Hobbs insisted said: “These royal jamborees are an overhyped,
superficial distraction from the harsh realities of modern life.

“Which is why I’ll be down the Mason’s Arms, necking a load of vodka and going mental with a pool cue.”

Palin 'hit with dishonesty bullets from .357 Magnum of unfairness' 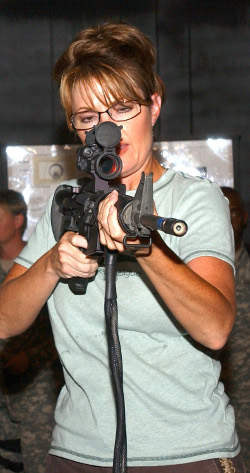 SARAH Palin has hit out at her critics in the wake of the Tuscon shootings claiming they have fired at her ‘with a semi-automatic hunting rifle of injustice’.

Mrs Palin has been criticised by some US commentators for continually using gun imagery in a way that – as they have made perfectly clear – would not have directly influenced the Arizona murders, but were certainly not designed to make people like each other.

But in a video posted on her Facebook page, the unofficial leader of America’s Teapot movement hit back saying she had been ‘sprayed with dishonesty bullets fired from the liberal media’s .357  Magnum of unfairness and America-hating’.

She added: “I’ve spent the past few days reflecting on what happened and shooting my prayer shotgun at God and then waiting for him to return fire with exploding bullets of wisdom from his Heckler and Koch submachine gun of everlasting grace.

“Acts of monstrous criminality stand on their own, like a brave American hunter on a lonely hillside, staring down the crosshairs of his beautifully polished Remington 750 Woodmaster as he waits patiently for something to kill.”

Getting weird, Mrs Palin then said the US media had also accused her of murdering Jesus and drinking the blood of Christian children.

She continued: “How could I have killed Jesus? I’m only 46 and Jesus was born in like 3000 BC or something. And everyone knows I only drink moose blood.”

Tom Logan, professor of politics at Reading University, said: “Mrs Palin has committed what is known as ‘blood idiocy’.

“She has become so utterly cretinous that she is like the early Christians who wound up inside some lions because of their unshakeable belief in something that didn’t exist.”

Meanwhile Mrs Palin has vowed to take the fight to her liberal opponents with a nationwide ‘Truth Tour’ where she will begin each event by firing 2000 rounds from a massive, belt-fed machine gun at a small piece of paper with the word ‘lies’ written on it.