Saint Peter said: “She’ll be arriving any minute, but I’ve looked through my list about 5,000 times and clearly I’m not seeing M. Thatcher.

“But I know for a fact she once bollocked Alan Clark so hard that he spent eight weeks in the fetal position before emerging with a permanent limp.

“Whatever you think of her politics, we can all agree she was absolutely frigging terrifying.”

People with no idea who Thatcher was 'ecstatic' that she's dead 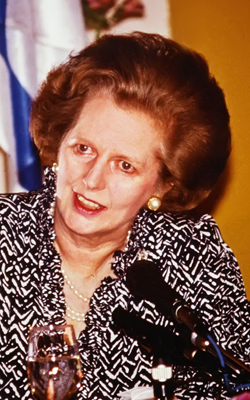 THOUSANDS of people under 35 are rejoicing at the demise of a woman they once read about.

Following Lady Thatcher’s death, people who want to look impressively ‘political’ are acting like they remember Thatcher as something other than a vague abstract concept of evil.

Guardian website regular Tom Booker said: “Thatcher is dead! This is the best day of my life.

“I was really against everything she stood for, whatever that was.

“Especially her ‘prole tax’. She actually invented the word prole, the old bitch.”

28-year-old Facebook self-promoter Nikki Hollis wrote: “Mrs T dead at last. Horrible woman, although I feel sorry for Mr T he was ace in The A Team.”

19-year-old student Stephen Malley said: “The worst thing about Mrs Thatcher was her lack of humanity, empathy or emotion.

“That’s why it’s great that she’s succumbed to dementia after what would have been a long, frustrating and humiliating illness of the type commonly affecting elderly people. The fucking old cow.”