FORMER Blue Peter presenter Valerie Singleton was under attack last night after insisting she was not a raving lesbian.

Singleton revealed she had done it with lots of men in a variety of hot, sexy positions, but had never even been tempted to lesbian anyone.

Tom Logan, Liberal Democrat MP for North Bristol, said: "This is an outrage.

"I have been sustained for many years by the thought of Valerie Singleton and Lesley Judd going at it like a couple of crazy lesbian cave women. Sometimes there was Angel Delight involved."

Backbench MPs are now calling for an urgent review of urban myths including the Richard Gere one, the Jamie Lee Curtis one, and the one about the newsreader who had a bust of Queen Victoria stuck up his back passage.

"I have, however, done it with Peter Purves. It was extremely mucky. He liked it when I applied sticky-back plastic to his big hairy bum and then ripped it off. Petra must have thought I was trying to kill him."

But Singleton also rejected accusations she was now the dirtiest of all the Blue Peter presenters, insisting she was probably dirtier than Peter Duncan, but nowhere near as dirty as Anthea Turner.

Britain Unveils Plan To Criticise Mugabe Out Of Office 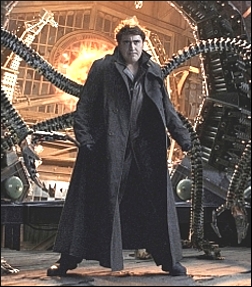 Rejecting claims that military action to remove Mugabe would take less than 20 minutes, foreign secretary David Milliband said democracy could only be restored with a series of sharply-worded press releases.

Mr Milliband is expected to issue an ultimatum to Mugabe, giving him one week to stop killing his opponents or face being compared to Dr Octopus from Spiderman 2.

He said: "It is time for action. It is time to start comparing Mr Mugabe to some extremely unpleasant fictional characters."

Mr Milliband set out plans to compare Mugabe to Hannibal Lecter, Ernst Stavro Blofeld and Alan Rickman as the Sheriff of Nottingham in Robin Hood: Prince of Thieves.

He added: "If all else fails, we are ready and willing to compare him to Biff Tannen from Back to the Future."

Within minutes of Mr Milliband's criticism the US State Department followed up with a devastating wave of press releases. The final release carried a picture of a large pair of buttocks with the handwritten caption, 'this is your face'.

Meanwhile Britain has deployed three divisions of critics in and around central London, including Matthew Parris, Simon Jenkins and Polly Toynbee.

George Monbiot will take up a position at his farm in Wales as soon as he has finished criticising Burma.