AS the first weekend of spring begins, the British countryside has come alive with rampant sex.

Naturalists are predicting this new season will be one of the most fornication-packed ever, as creatures of all shapes and sizes become aroused after a long, cold winter of sexual dormancy.

Wildlife expert Bill McKay, author of Notes on Spring: Nature’s Own Fuck Fest said: “The sun is out, the days are lengthening, Britain’s wildlife is once again looking to get its swerve on.

“I was out in the Cotswolds yesterday, and the hedgerows were reverberating with mammalian squeaks and squeals of unbridled pleasure.

“There were rabbits doing it, as you’d expect, but also pigeons, mice and foxes were getting lucky.

“I even saw a badger getting double-teamed by a kestrel and a rare Natterjack toad, latin name Bufo Calamita. Goodness, that badger was really getting nailed.

“It’s really a great privilege to watch this rich tapestry of life unfolding.”

Laurie Lee wrote of spring in his poem April Rise, ‘If ever world were blessed, it is when the boning time begins.’

Elsewhere in rural Britain, giggling pubescent girls in white floaty dresses have been dancing around a phallic totem at a supposedly family-friendly event called a ‘fete’, while a leering half-goat piper looks on from behind a bush. 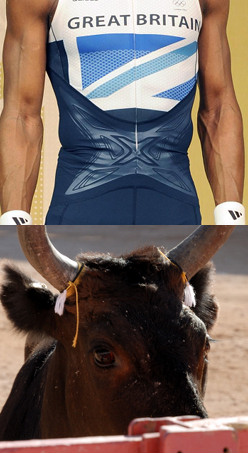 BRITAIN’S Olympic team need have no fear of rampaging bulls, it has been confirmed.

The team’s official kit is based on the flag of a mystery country amid fears the nation’s athletes could be attacked when a truckload of bulls inevitably overturns nearby.

Designer Stella McCartney said: “Red is a very dangerous colour. I feel sorry for the Chinese. A lot of them will be gored to death.

“To protect our athletes I chose the flag of the mystical country of Kintyria.

“When I was young my father would sing us songs about Kintyria and I always imagined it to be a wonderful place full of world-class rowers who could wander through a field of cattle with complete confidence.”

She added: “The bulls will escape and then burst into the stadium, snorting and scraping at the ground. Moments later the ground will be soaked with blood and that blood will be Chinese. Or possibly Canadian. Or Swiss.”

McCartney said: “If I’d just used the English flag then as well as bull attacks there would lots of tedious Scotsmen whining like bitches.”