Water vole has a massive go at heron

WATER voles are no longer taking shit off predators, it has emerged.

The almost-extinct rodents have made a surprise return to Britain’s riverbanks and are now unafraid to verbally abuse larger animals.

Last week amazed onlookers at a riverbank near Stoke-on-Trent watched as a tiny, damp vole reared up on its hind legs and repeatedly told a heron to go and fuck itself.

“The large bird looked terrified and actually muttered an apology before flying off.”

Vole Tom Logan said: “Every single day I go out looking for twigs, bulbs and other organic matter to eat. Just minding my own business.

“And every time, something tries to eat me. Mink, ferrets, eagles, owls, foxes, cats…the list goes on and on.

“I’d had enough. It was time to stop running.

“Seriously, I don’t mess with them. Do I? Do I? No I don’t. So what was with this fucking bullshit, every single day of my life. I don’t even taste good.”

He added: “Don’t just accept that you’re lower down the food chain. Stand up to predators, most of them are cowards anyway.

“Don’t let them push you around just because of the massive size disparity and sharp teeth. Seriously, I am ready to punch a fox.

“By the way, I don’t normally swear. Sorry about that.” 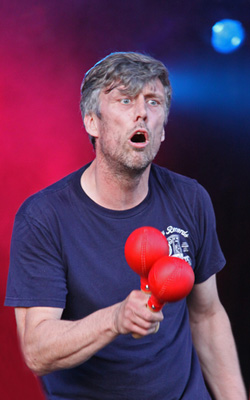 BRITAIN has been warned to wind down its jubilee partying, with many celebrants now having been seven nights without sleep.

Lionel Richie, now naked expect for a Weetabix box jammed on his head, has been performing acappella rave anthems on a makeshift stage while the Red Arrows, most of whom can barely stand, are preparing to fly through the British Museum for their own twisted amusement.

A government spokesman said: It’s time for everyone to go home. Seriously, before we get the army out.

Admittedly when you tell a nation of mostly-unemployed drunkards it’s going to be ‘the best party ever’ you might expect it to get a little rowdy. But I’ve just seen Rolf Harris being cooked on a spit by a group of children in Kate Middleton masks.

Although their camera crew left days ago, a gurning Fearne Cotton and Lenny Henry are still narrating events as they unfold, occasionally pausing to interview each other about what it would be like if you could peel back the sky and see the inner workings of the universe.