“He was really pleased to see his vision of the future come true,” said deceased writer’s daughter. 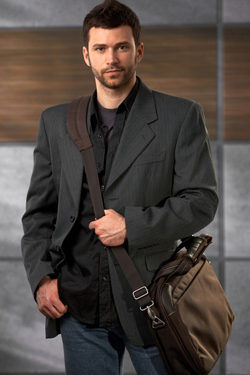 THE theft of passwords from networking site LinkedIn is a direct attack on the world’s prick and douchebag communities, it has been claimed. Sadly he was not hacked in the 'with an axe' sense

LinkedIn had become hugely popular with the world’s sizeable prick population, as it allows those who claim to be ‘Global President of Cross-Platform Technologies’ at a make-believe company to connect with similarly-deluded dipshits.

Now some members are interpreting yesterday’s password hack as an anti-prick hate crime.

Media-type prick Wayne Hayes, whose LinkedIn profile describes him as ‘Future Media Co-Conspirator at Zap! Pow! Bang! Productions’, said: “It’s hard to be as big a prick as me in mainstream society.

“When I ride into the dole office on my fixed-wheel bike, twirling my fighter pilot-style moustache while ‘chillwave’ music leaks from my iPod headphones, I usually get punched within five minutes’ of arrival.

“LinkedIn is a safe place for kindred pretentious dickhead spirits who also still live with their parents.”

Helen Archer, ‘Head of Cross-Brand Pollination at NeoNode Industries’, said: “Whoever did this really hates people like me. Which, I must admit, doesn’t really narrow it down.”

Outside of the prick community, millions more are trying to remember whether they are members of LinkedIn.

IT consultant Bill McKay said: “I’m fairly sure I joined this once, in some vague attempt to be cool.