AN EXPECTANT father is using it as an excuse to get out of doing anything he can not be bothered to do, friends have confirmed.

Tom Booker, aged 34, has so far employed ‘I would, but we’re pregnant’ to get out of helping his dad clean gutters, a team-building day at work, a Mogwai gig and shopping for a pram.

Partner Nikki Hollis said: “Tom’s saying ‘we’re pregnant’ in a very supportive, feminist way that can’t be challenged, which is why it’s the perfect excuse for being a selfish bastard.

“If he was spending his time painting the nursery it’d be fine, but he can’t because he’s ‘worried about the toxic paint fumes’ and ‘really needs to complete Super Mario Odyssey before the baby arrives’.

“He’s not the one who’s preparing to do the equivalent of shitting a pumpkin and apparently ‘we’re pregnant’ doesn’t stop him necking four bottles of BrewDog every night.

Student suddenly realises all his housemates are dicks 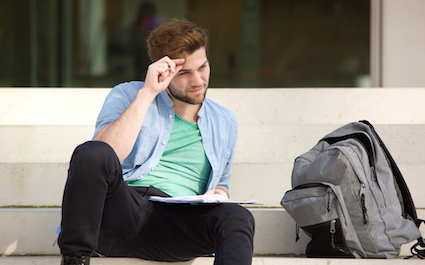 A FIRST-YEAR student has suddenly realised, mid-term, that everyone he lives with is a total and utter dick.

Nathan Muir, who is studying politics at Leicester University, was stunned by the revelation which was a complete reversal of his previous belief that they were all amazingly brilliant.

The student, who is sharing an apartment in halls with seven others, said: “Shit. I can’t believe it. They’re all total wankers.

“I’ve spent the last term-and-a-bit delighted at my luck at being put with such a great gang, but now I realise that was my brain protecting itself from the traumatic realisation I’m cohabiting with arseholes.

“Adrian’s making his own hummus, Allie rips everyone off for bad weed, and Tim does nothing but beat everyone as Hereford Town on FIFA. They’re dicks.

“We’ve all promised to get a house together next year but I’d actually prefer to drop out.”

Housemate Joe Turner said: “Omigod, there is no way I can live with Nathan next year. I’ve just realised. He’s such a dick.”