RAIL operators are to protect passengers with brain cells by introducing carriages exclusively for twats who refuse to wear face masks.

The carriages will be clearly labelled with a picture of a mask being cut in half by scissors and aim to provide a safe space for morons to be stupid.

A National Rail spokesman said: “Public transport can be stressful for halfwits who don’t follow health guidelines, what with people shouting at them or secretly snapping them on their phones so they can bitch about them on social media.

“By giving them their own carriages, anti-mask wankers will be free to misinterpret science, exchange conspiracy theories, and splutter coronavirus all over each other to their heart’s content.

“To make them feel at home we’ll also pipe in Talk Radio and refer to face masks as muzzles. Anyone wearing a face mask in these carriages will be asked to move to a more considerate part of the train.

“Idiots who wear their masks pulled down around their chins are also strongly advised to use the anti-mask wanker only carriages as well. F**k ‘em.” 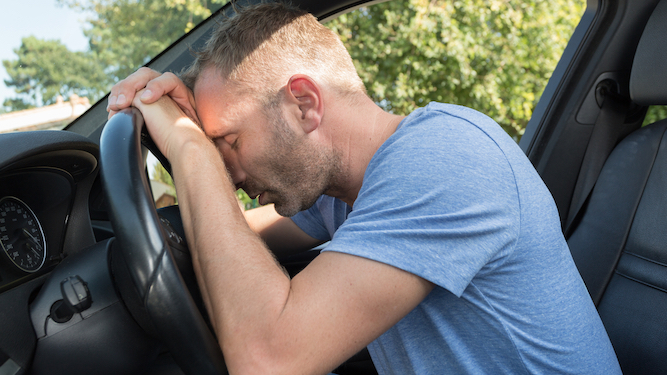 THE number of parents loathing the school run with every fibre of their being is already at the level it was in March.

With most parents in England less than a week into twice-daily school runs, parents across the country have reported serious and concerning spikes in their frustration, rage and incidents of swearing at traffic as they try to fit this shit into their busy schedule.

Father-of-two Tom Booker said: “Is it great that the kids aren’t in the house anymore? Yes. Do I bitterly resent every moment I spend dragging their arses to and from school? You bet your balls I do.

“I’d forgotten the pain of getting them dressed, getting them and their shit into the car, trying to find a parking space within half a mile, then schlepping back and forth through drizzle for no thanks whatsoever.

“And now the school’s added the kind of bollocks one-way system popular in supermarkets in June, so you come out completely the opposite side from where you went in.

“Plus they’re barely at school half the day, so you get home, do a bit of work, have a bit of lunch, answer three emails and it’s time to get them again.

“At least there aren’t any f**king after-school clubs to forget about so you have to spend 40 minutes hanging around a park. Yet.”