Disappointed racist can’t get anyone kicked off flight

A DISAPPOINTED British racist cannot find anyone bearded enough to get them thrown off his flight to Majorca.

Norman Steele of Stoke-on-Trent has been up and down the EasyJet flight to Palma three times but has not spotted anyone reading Arabic, speaking Arabic or even just sporting a beard.

He said: “Some start to the bloody holiday this is.

“I’m squared up ready to kick ISIS, or Al-Qaeda if I have to make do, right onto the tarmac and what do I find? A bunch of fucking Brits.

“A Welsh lad up front was reading a fantasy book with curly writing on. That’s almost there. He’ll have to do.”

Steele, and his family, were then removed from the plane by intelligence services after a fellow passenger reported him muttering about Sharia law.

‘You, too, can destroy your own country,’ Farage tells US 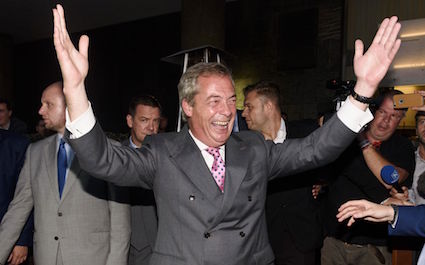 NIGEL Farage has told an audience of Trump supporters that the power to completely devastate their own nation is in their hands.

The former politician told a Trump rally in Mississippi that they too could wipe away decades of stable economic growth on nothing more than a petulant whim.

Farage continued: “In the UK, which is in London where the Queen lives, we too had politicians, economists and experts preaching from on high about the absolute disaster we faced if people voted for their petty and small-minded prejudices.

“We ignored them, they were right, and now I’m here to urge you to forget the polls, vote for a permanently tanned man with a long record of fuck-ups, and plunge your nation into depression.

“You too can balls up your nation in a single stroke. Plus you all have guns, so I can’t imagine how much more exciting your societal breakdown will be.

During his US trip, Farage also has a meeting about playing a butler in a new Adam Sandler film.