ISRAEL and Palestine last night signed a hastily arranged peace deal in a desperate bid to prevent a visit from Hillary Clinton.

Israeli foreign minister Tzipi Livni, and the leaders of Hamas and Fata made a video conference call to Mrs Clinton stressing there was absolutley no need for her to get involved when she becomes Secretary of State.

Livni said: "Everything's fine. These guys are a hoot, I love them. We're actually thinking about going skiing together."

With her Palestinian counterparts nodding vigorously in the background, Livni added: "So there's really no need for you to come here at all. Why not try India and Pakistan?"

But last night the Indian and Pakistani governments stressed they were making excellent progress towards a lasting solution and that Mrs Clinton would really be wasting her time.

Within half an hour the governments of Sudan, Rwanda, Zimbabwe and the Democratic Republic of Congo produced a joint statement pledging to solve their respective conflicts and stressing they did not want Mrs Clinton to pack a suitcase for no reason.

A Kremlin spokesman said last night: "Don't even think about it, you annoying cow." 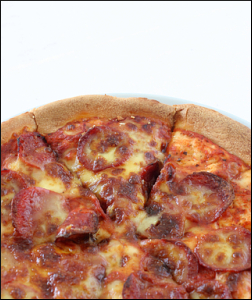 HAVING free sex with your wife is now slightly better value than Pizza Hut, according to a new survey.

In a YouGov survey of 2,000 married men, 89% said the recession had made marital intercourse slightly better value than a £24.99 tasting platter, a large, stuffed crust pizza and a bowl of spaghetti carbonara.

However, 24% said the £5.99 'all you can eat' midweek buffet was still a good deal compared to five minutes of sweaty, grudging tedium.

Tom Logan, married to Jill for 13 years, said: "We've had to cut back to Freeview, which means we've lost Sky 1 and the Richard and Judy Channel.

"So at least two nights a week you're forced to choose between just sitting on a chair and staring at the wall or going upstairs and doing the deed."

He added: "And it's not really free either. Tesco value condoms are 38p a pop, but at least you can economise by rinsing them under the tap or turning them inside out.

"The sex is your basic, entry level humping. If I want anything special I have to save up my dole money and buy her some ice cream."