Outrage Over Plans To Build Library Next To Sarah Palin

PLANS to build a state-of-the-art library next to Republican catastrophe Sarah Palin are causing outrage across mainstream America.

Campaigners have described the project as insensitive and a deliberate act of provocation by people with brains.

The issue is forming a dividing line in advance of November’s mid-term congressional elections with candidates being forced to declare whether they have ever been to a library or spoken to someone who has books in their home.

Meanwhile President Obama has caused unease within his own Democratic party by endorsing the library and claiming that not everyone who reads books is responsible for calling Mrs Palin a fuckwit nutjob nightmare of a human being.

But Bill McKay, a leading member of the right-wing Teapot movement, said: “Sarah Palin is a hallowed place for Americans who can’t read.

“How is she going to feel knowing that every day there are people going inside a building to find things out for themselves and have thoughts, right in the very shadow of her amazing nipples.”

He added: “Our founding fathers intended for every building in this country to be a church containing one book, written by Jesus, that would be read out in a strange voice by an orange man in a shiny suit who would also tell you who you were allowed to kill.

“Building a library next to Mrs Palin is like Pearl Harbour. Or 9/11.”

And Wayne Hayes, a pig masseur from Coontree, Virginia, said: “I is so angry right now.

“It’s like something is on fire right in the middle of my head. Like I’ve eaten a real hot chilli, but it’s gone up my nose tubes rather than down my ass tubes.”

He added: “Would these library lovers allow me to set up a stall next to the Smithsonian Museum and start selling DVDs of bible cartoons as long as it was in accordance with local regulations?

“Oh they would? I see. So is that why they’re better than me?” 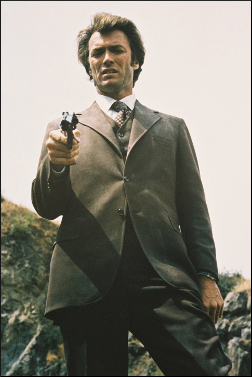 I NEVER asked for this assignment, but I guess some dumb sonofabitch has got to do it. You see what those assholes in suits downtown don’t understand is that when someone lets their dog crap on the pavement it’s guys like me who have to put it in a plastic bag and dispose of it. And some dogs are really scared of plastic bags, so it’s not easy.

There I was minding my own business, sitting in my front room watching My Goddamn Family, when the doorbell rings. “Hello, I’m Martin, I’ve come to collect the Betterware catalogue I dropped off last week.” “Well Martin, seeing as we’re on first-name terms – Martin – I thought I’d best tell you that the last salesman who darkened my door ended up with a blowhole in their forehead.” And with that I returned his goddamn Betterware catalogue.

If it’s one thing I hate it’s Neighborhood Watch meetings. They’re full of fat-ass, pen-pushing beauracrats who don’t know the streets, who don’t know what it’s like when some doped-up punk is sticking a ’45 in your ear or soliciting donations to the Royal National Lifeboat Institution.

Just about everyone had a beef at this meeting. Mrs Fosdyke’s dog taking a shit on Mr Thompson’s rockery, the white trash who live at Number 23 had dumped a sofa on their front lawn, and then there’s the Camel Jockeys on the corner who the Colonel thinks are a terror cell. Jesus, I thought myself, we’re going to be here all goddamn night.

In the interest of bringing the meeting to a point of order I put one in Mr Thompson’s leg from close range, then shot the light fitting out before telling all those assembled, ‘okay, meeting over – now if anyone cares to join me, I’m going down to West and 42nd for a chilli burger and a root beer’, only for Darren, my asshole assistant to point out that this is Woking. Sonofabitch.

I’ll tell you, if it wasn’t for those asshole liberals at the Mayor’s office I could have cleaned this town up a long time ago. They said ‘no’ when I suggested using piano wire to deal with the mini-motorbike problem; they said ‘no’ when I recommended using triangulated sniper positions to disperse local youths and, goddamn it, they even said no when I offered to blow the head clean off of Mrs Worthington’s yappy little terrier.

Everyone would sleep a little easier and I’d be all broken up over that dog’s ‘rights’.