The Brexiter's guide to bending over and taking it from Trump

ARE you a Brexit supporter who wants any US trade deal, no matter how violating? Here’s how to be fine with a shafting from Trump.

Be scientific about disgusting US food

Say ‘Salad is washed in chlorinated water, actually’, acting like a super-rational man of science. Don’t mention that you got an E at GCSE and the mere thought of American cows dripping pus from their udders puts you off milk for life.

D-Day, the Dunkirk spirit and the Battle of Britain can all be invoked. Ignore that if Brexiters had organised Dunkirk there’d have been no evacuation and the army would just be standing aimlessly on the beach, perhaps smashing a few crabs with rocks.

Drone on about the Anglosphere

The Anglosphere is based on deep cultural and historical bonds forged during the days of Empire, or cut the crap and admit what you mean is the ‘Not-brown-people-o-sphere’.

When someone says ‘Trump’s going to make us buy spray-on cheese. Didn’t you vote Brexit, Dave?’, distract them. Wet yourself, start a fight or carry a decomposing moggy with you at all times in a carrier bag for a literal dead cat strategy.

A deal with the US could spell disaster for British farmers. Claim this is a good thing because ‘it serves them right for when you get stuck behind a tractor’. Are you serious? Are you joking? With Brexiters no-one, even themselves, can ever be sure.

However bad the trade deal is, it’s still infinitely preferable to actually being rogered by Trump with his weirdly coiffed hair unravelling in sweaty excitement until he looks like an orange version of Riff Raff from The Rocky Horror Picture Show. 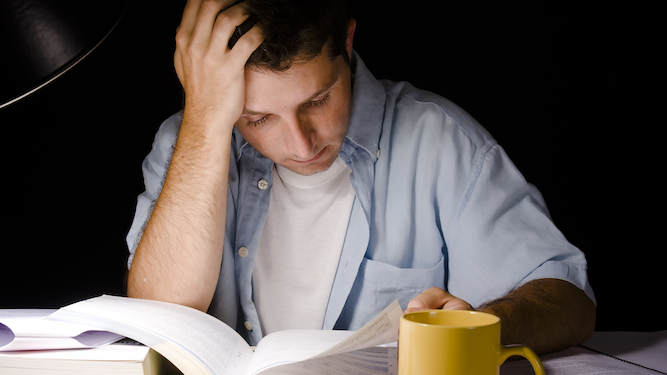 A THIRD-YEAR student has pulled an all-night session to finally work out what he thought an English Literature degree would be good for.

Stephen Malley has avoided seriously contemplating the question for two-and-a-half years but with only months until he graduates, admits it is time to buckle down.

He said: “I started at 8pm last night and I was still puzzling away at dawn, fuelled by endless cups of coffee and Red Bull.

“It’s not just that I’m going to be worthless on the job market, I also realised that most books I have to read are actually incredibly boring. So if I don’t actually like English literature, why study it?

“I should have taken care of this earlier on in the degree instead of procrastinating. Why did I think this would be a good idea? Because I once read Camus and I’m active on Goodreads?”

“I’m never going to get a first with no fundamental belief in the worth of my degree. But I can probably get away with a 2:1.”

He added: “One thing I have proved with this all-nighter is that I’m a a real thinker. I should probably have done a degree in philosophy.”