What In The Name Of F*ck Is Wrong With You People, Declares Un

THE United Nations last night passed an emergency resolution calling on the people of Pakistan to explain exactly what the fuck is wrong with them.

With Pakistan leapfrogging France to become the third maddest place on Earth, the international community has called on the country to sit down, take a deep breath and explain what in the name of all things Godly it was thinking of.

"Still, they may be out their minds but at least they are not in a strategically vital position and armed to the teeth with nuclear weapons. Oh, hang on, they are. How fucking splendid!"

Last night the UN security council debated a series of resolutions including, 'What the fuck?', 'Are you fucking kidding?' and 'Can we just pretend they don't exist?'.

After last-minute wrangling senior diplomats passed resolution 1795, stating: "The United Nations calls upon the people of Pakistan to explain what in the name of fuck is going on.

"Furthermore, we urge you to get a bloody grip and realise that you don't have to end absolutely every single argument by blowing someone to pieces."

Ali Zalfaqir, head of unspeakable atrocities at the Pakistan Movement for Constant Misery, said: "It is perfectly reasonable for us to question her health and education policies by shooting her and then blowing her up.

"For her to then die as a result is little more than cynical electioneering." 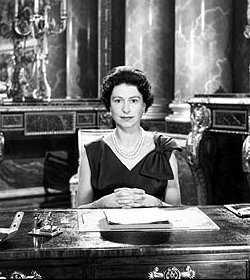 THIS year's Christmas message from the Queen has failed to impress the critics with most dismissing it as self-indulgent and boastful.

The Queen spent two days writing and recording the speech watched by more than 23 billion mammals across the globe on Christmas Day.

George Monbiot, Queen's Christmas Message reviewer for the Guardian, wrote: "The whole thing was a self-satisfied diatribe about how she's the Queen and I'm not.

"The footage from the 1950s was particularly despicable. She's basically saying, 'I've been the Queen for absolutely ages', as if somehow that makes her better than me."

Andrew Motion, the Poet Laureate, writing in the Daily Mail, said: "Jesus, whose very birthday it was, received just three miserable paragraphs, then it was back to her and her ghastly husband flying around the world, forcing everyone to repaint their houses.

"And if she is going to give support to our brave troops overseas she could at least do so while holding up a large photograph of Gemma Atkinson in a thong."

Former home secretary Douglas Hurd, writing in the Daily Telegraph, said: "They should go back to doing it live.

"Remember the great Christmas message of 1974? What a year it had been – the miner's strike, Watergate, Keegan scores two in the cup final. There was a bead of sweat on her brow and the whole thing crackled with tension, especially after all those rumours she would say 'piss'."

He added: "I still feel that her message about the destitute lacks conviction.

"Perhaps next year, instead of using one of her eight centrally-heated palaces, she should deliver the speech while sitting on top of a noisy, homeless Scotsman in the middle of rain-sodden car park in Croydon."