LORRY driver Dennis Jackers was last night celebrating the first anniversary of starting to overtake fellow trucker Bob Mellows and the creation of a tailback described by the UN as a “crime against humanity”.

Mr Jackers shifted his top of the range Scania R620 into the outside lane of a two-lane section of the A1 in South Yorkshire at the end of September last year in an attempt to overhaul Mr Mellows, who was also driving an R620.

By November the front of Mr Jackers' cab was level with the rear bumper of Mr Mellows’ truck as the two raced on at 50.0001 mph and 50 mph respectively having built up a queue of traffic 72 miles long behind them.

By Christmas Day Mr Jackers had managed to edge his lorry almost level with the first set of rear wheels on Mr Mellows’ trailer while the traffic jam now stretched from the edge of the M25 to the Fort Kinnaird Retail Park near Edinburgh.

However, after starting out as deadly rivals the two drivers have now become great friends, sending each other Christmas and birthday cards and regularly hopping into each others cabs for games of Mah Jong.

Mr Jackers, said: “Bob is a great guy, he’s sensitive and caring and extremely generous sexually. I don’t ever want to overtake him. I just want to travel life’s highway at his side forever.”

Colonel Bradley Pace, a UN traffic observer, said the jam was the worst he had seen since the Iraqi army got stuck on the road from Kuwait during the first Gulf War after coming up behind a 26-foot Elddis Crusader Super Storm caravan being pulled by a Morris Minor driven by Mr Jackers' parents David and Enid.

He said: “We are committed to the peaceful resolution of conflicts and major traffic snarl-ups through discussion. But on this occasion we think we should just blow the fuckers up.”

Robert Preston, 43, a photo-copier salesman from Clydebank who has not seen his wife since February after becoming gridlocked on the A1 just outside Stevenage, said: “Kill them all, kill them now.” 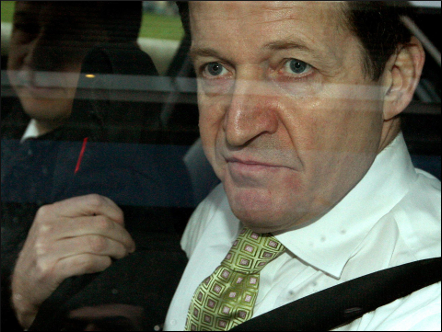