Lord of the Flies, and four other state-of-the-art parenting styles

SMUG parenting blogs may be trying to persuade you to be a ‘hummingbird’ parent, but why not try these more natural styles instead?

Lord of the Flies

Without the civilising influence of others, small groups quickly revert to feral savagery, fighting wars, slaughtering each other and creating strange religions. But after that they pretty much settle down and govern themselves, so worth considering. Popular during lockdown and many families have adopted it permanently.

Unlike helicopter parenting, which involves constant attentive hovering around child, submarine parenting means mainly ignoring them until the perfect opportunity to torpedo them with an embarrassing comment or anecdote in front of their mates.

Previously known as ‘authoritarian’, Priti Patel parenting means harsh behavioural crackdowns way out of proportion to the crime, like being sent to live in the shed and eat leaves foraged from the garden for spilling a glass of juice. Deliver with a smirk for maximum psychological damage.

At the other end of the scale is copying Snoop, frittering money on expensive fripperies and being as chilled as possible, and always being available for PlayStation sessions, watching cartoons or just to talk, as long as you’re not doing bong hits in the garage. Likely just as successful long-term.

You know when you let the kids take all the cushions off the sofa, jump all over the furniture and swing from the light fittings? It becomes a style of parenting in itself when you can’t be arsed to tidy it all away and just adopt it as an unpractical but entertaining lifestyle. 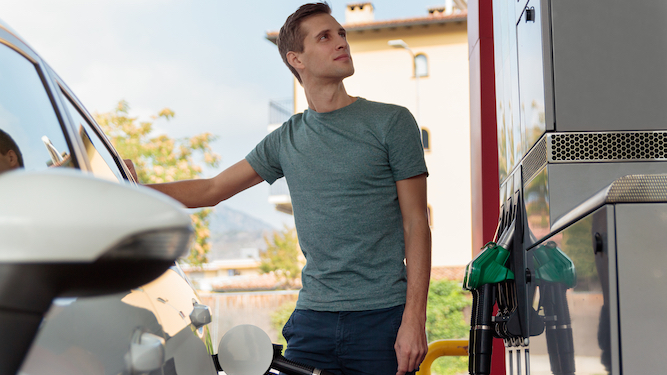 A MAN will be in a foul mood for the rest of the day after his slow trigger finger left him paying for £50.01 of petrol.

James Bates was filling his Kia Sportage and aiming to get it right on the button as usual when a moment’s inattention left him humiliated by his own clumsiness.

He said: “I was doing alright until about £33.45, when I started to think about the finale of that Life On Mars show and what a load of cock it was. By the time I snapped out of it I was just a fraction too late.

“Going in to pay was the worst bit. The cashier just looked at me like ‘You poor bastard’. I couldn’t even meet his eye. I bought a Lucozade just to make it less shameful and ended up leaving it on the counter.

“I haven’t been this ashamed since my last premature ejaculation. Who knows what else these oafish hands will screw up? Better write today off. I feel like the whole world’s laughing at me.”

Garage attendant Ryan Whittaker said: “Mate. Mate. You would not believe the dickhead we had in here today. Fifty pounds and one penny. Look, we’ve kept the wanker’s receipt.”