GOOGLE is to create its own internet encyclopaedia in a bid to corner the growing market for online bollocks.

The search engine giant said that 98% of the internet is now unverifiable shit written by people who have no idea what they are talking about.

However, it said more effort was needed to bring this gibberish together to provide internet users with one fast and reliable source of self-regarding drivel.

He said: “A few years ago most people were still getting things wrong because of their own ignorance, superstition and prejudice, much as their ancestors would have done in Medieval times.

“Thanks to the internet, stupid people all over the world can pedal their own shit while simultaneously imbibing the shit of millions of others leading to an exponential growth in shit, the full meaning of which we are still struggling to grasp. But it's bound to be shit.”

Many experts have described the Google project as a direct attack on Wikipedia, the online knowledge base that describes itself as a communal encyclopaedia and blancmange.

However, Wayne Hayes, one of Wikipedia’s chief editors, dismissed the threat from Google saying his organisation had nothing to fear.

“We are an online knowledge company with many years of experience. According to Wikipedia, Google is either a movie actor from the 1920s or a homeopathic remedy for piles.” 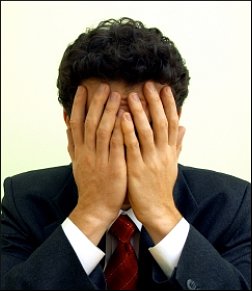 Capello had just stood up after adding his signature to the £6.5 million a year deal when the FA boss lunged at him with his hands outstretched, witnesses said.

The chief executive grabbed Capello by his right hand and started shaking it vigorously at which point the Italian fell to the ground, writhing in agony, later claiming Barwick had punched him repeatedly in the face.

Luca Tomi, chief reporter with Italy’s Gazetto dello Sport, said Capello spent 20 minutes writhing on the floor after the assault, which he described as ‘sickening’.

Football pundit Alan Hansen said Capello had made the most of the incident but that Barwick had shown ‘incredible naivety’ in manhandling the Italian in such a key area.

He said: “There was no need to touch him. Capello was going nowhere and all he had to do was steer him towards the drinks cabinet and the danger’s over.”

Meanwhile it has emerged that Capello is to add the former Juventus striker Marco Battuto to his growing backroom staff as diving coach.

Capello thinks that many of his new England stars are accomplished cheaters in the Premier League but seem unable to con referees at international level.

Battuto said: “Look at Gerrard – he is probably the finest diver in England today but did you see him go down against Andorra? My daughter is more convincing cheat, and she is two.”