Yes, it does do telly, weary Sony tells UK

But the corporation held a special UK press conference last night to confirm the only attribute of the device that really matters to the British people.

A spokesman said: “In response to the thousands of emails, letters and burger wrappers with crayon writing on them that we have received from the United Kingdom, I am forced to confirm that this cutting-edge machine, which was years in development with some of the finest minds our industry has ever seen, does do telly.

“For clarity’s sake, this includes the dancing. And the skating.

“And, yes, also the boobies.

“Now if you’ll excuse me, I just have to go and kill myself.”

British citizen Tom Logan said: “I think he say it do telly. But me not sure. He say other long words too, make head hurt.

“Do not get me wrong. Me want thing. It shiny. But what if me buy then it no do telly?

“Then me angry, smash shop with stick.”

UK-based technology journalist Emma Bradford said: “It’s terribly depressing that whenever a potentially revolutionary piece of technology hits the market, we as a nation simply grunt, ‘do it do telly’?

“The question we should be asking is ‘do it do telly better than other thing?’.” 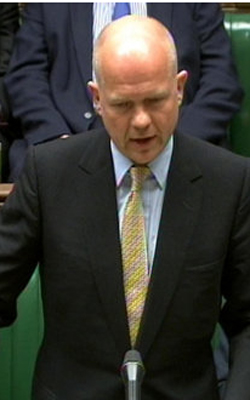 POLITICIANS in Syria have sobbingly asked William Hague if he can just give them a second chance.

After Hague shook his head slowly and asked what on earth they thought they were playing at, Syrian armed forces were seen to hide bloodied anti-government protestors behind their back and sheepishly insist they were only messing about.

President Assad told Hague “We’re really, really, really sorry and we promise we’ll clean up all the mess and buy all the widows a nice bunch of flowers and everything. We’ll be a good violent autocracy from now on, we cross our heart.

“It’s all Iran’s fault, they started it. They were all like ‘Go on, suppress free speech and kill innocent civilians, it’ll be well funny’ and we just got carried away.”

Hague’s disapproval for all of Syria’s carrying-on started after he was called in to the UN’s office by Ban Ki-moon because of their behaviour. Moon said that if their Human Rights marks didn’t improve soon, they may have to look at suspension from the UN for two weeks.

Moon said “We have a strict anti-bullying policy at the UN so we can’t have them calling their pro-democracy protestors hurtful names or firing at them with tanks. And yes, we’re looking at you, Yemen, don’t think we’ve forgotten about you.”

The Foreign Secretary has warned Syria that he will still consider asking all the other countries to stop their pocket money by imposing sanctions and reminded them that he was a very busy man and didn’t have time to be dealing with their nonsense every five minutes.

Hague added “I’m more hurt than angry as I feel Syria have let themselves down more than anyone else. Somebody was due to get a nice, big arms deal as a treat but now I think we’ll just see if that nice Israel wants it instead.”