Arsehole has strange need to outdo whatever you've just said

A MAN cannot listen to a harmless anecdote or mildly amusing comment without trying to do better, it has been confirmed.

Julian Cook constantly tries to have the last word in everyday conversations for no obvious reason other than being a petty little git.

Co-worker Nikki Hollis said: “I was telling people about a crap pub meal I’d had, so naturally Julian had to mention the time he was served raw chicken that ‘could have killed him’.

“I don’t get it. What sort of pathetic, over-competitive arse tries to outdo someone over a mildly diverting story about some cold chips?

“Another time Lucy got completely soaked in the rain and our colleague Dave said, ‘I think a few drops might have landed on you, Luce.’ Everyone laughed but I could see Julian desperately trying to think of something funnier.

“After several minutes all he could think of was ‘Is it raining slightly, Lucy?’, which was too late and really just what Dave said anyway. Christ he’s a pathetic little shit.”

Cook said: “I think my colleagues appreciate it when I liven up a dull conversation about Emma’s holiday at Pontins by mentioning the time I visited the Great Pyramid in Egypt.

“I was going to entertain them with my conversational skills at lunch but they seem to have gone without me and forgotten to leave a note.”

No, I was the mate of the idiot president before this one, says Blair 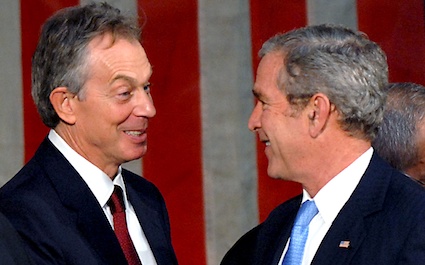 TONY Blair has explained that he was mates with the halfwit president who invaded Iraq, not this butterscotch-whirl-haired knobhead.

The former prime minister, accused of warning Trump that he was being spied on by British intelligence, clarified that his friend was George W Bush, America’s new low previous to Trump.

He continued: “There’s no way I’d help Trump out. No way. No, mine was the utter fucking idiot who in retrospect doesn’t seem too bad.

“You remember? Chimp-eared guy, blank expression, only in the job because his dad had been, read a kids’ book about a goat while his country was under terrorist attack?

“Sure, he had his faults, but he was way better than Trump. Just imagine him in office on September 11th. There’s no way he could’ve read that goat book.

“I know it was kind of embarrassing seeing me buddying up with Dubya at the time, but compared to May taking Trump’s tiny hand like a nursery nurse taking a toddler for a trouser-change it was minor.

“The cool presidents? Never returned my calls. It’s a mystery why.”