THE events of this year mean it will be remembered in our language for centuries to come. Which of our new idioms will the future puzzle over?

Refers to the current year’s crop of A-level students with absurdly inflated grades, who employers will be wary of hiring for the next three decades.

‘This one’s on Rishi’

An extra drink or serving of a meal that one cannot afford in the least, credited to the famously munificent chancellor who could not afford it either. An acceptance that an indulgence will lead to financial disaster.

A phrase used to explain that you will be spending the weekend drinking and wanking yourself into unconsciousness while barely-dressed, unwashed and unfit for company.

‘I was following the science’

Getting oneself into a situation from which you can neither move forwards or go backwards without admitting that it’s your own fault you’re there because you’ve been telling an increasingly convoluted series of lies.

Any bridge or temporary situation absolutely guaranteed to collapse and leave one stranded. ‘Are you getting a lift to the works do with Dave?’ ‘Nah, it’s an air bridge that. He gets pissed and you have to get a hotel.’

Description of someone completely deluded about the security of their position, in work or a relationship, which is about to come crashing down.

Interjection which means that whatever someone has just said is a lie and an intelligence-insulting one. For example: ‘…so that’s what happened and I didn’t spend the rent money on cocaine.’ ‘Yeah. Says Cummings.’

Undertaking driver in rush to get to f**knut convention 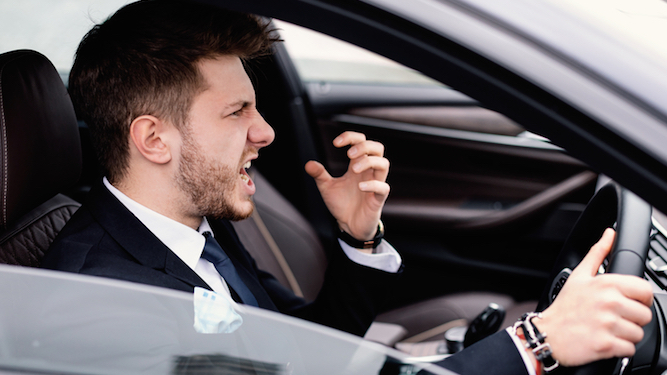 A DRIVER who undertook multiple cars on the motorway was in a hurry to get to a convention full of other f**knuts, it has emerged.

Julian Cook, who was on the M1 in his large black Audi, felt he had to ignore the rules of the road to arrive in time for a horrific sales event full of idiots like himself.

He explained: “It was vital that I swerved from lane to lane, overtaking without warning and neglecting to indicate.

“If I hadn’t, there’s every chance I would have been late for the convention, which is very important to the f**knut community.”

The event, a convention-cum-exhibition for secondhand car dealers near Watford, was a precious opportunity for Cook to catch up with his f**knut business acquaintances.

Cook said: “I’d been looking forward to hearing Steve wanking on about his property portfolio and Gavin telling me which of the small number of women present he would ‘do’.

“And I’d have kicked myself if I’d missed the after-dinner entertainment by complete f**knuts Laurence Fox and Roy ‘Chubby’ Brown.”