Cashpoint morons warned to plan ahead

DECIDING in advance what you want from a cashpoint can stop others wanting to kill you, it has been claimed.

The Institute for Studies found that potentially dangerous bank machine deliberation could be avoided by planning your transaction before reaching the front of the queue.

Professor Henry Brubaker said: “If you’re waiting to use a cash dispenser, ask yourself a few questions. The main one is ‘how much money do I want?’

“It’s good to have a specific figure in your head, for example £20. Or any multiple of ten, whatever.

“Bear in mind that cashpoints are not places for quiet contemplation, phone calls or socialising. Nor are they crude arcade machines for your stupid, idle amusement.”

Retail assistant Mary Fisher said: “But I like to be ‘in the moment’ when I’m operating a cash machine.

“It’s like free jazz, there are no rules and time is not a factor. I’ve just got three different cards – two of which have expired – and a headful of vague possibilities.”

Office worker Tom Logan said: “I enjoy going to cashpoints and pressing all the different buttons because of the lovely computer music it makes. It’s like my own private Kraftwerk concert.

“How could anyone possibly have a problem with that?” 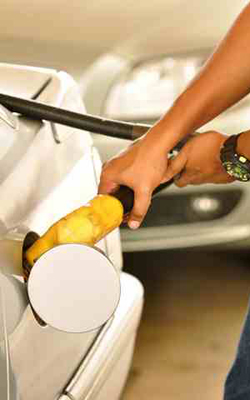 THE high cost of petrol may not be caused by poltergeists, it has emerged

Oil companies had insisted that fuel prices were high because of mischievous ghosts who lived in petrol pumps and could only get into heaven by increasing the cost of living.

And before the discovery of the first haunted forecourt, the companies said the price was dictated by ‘international moods’ or an algorithm based on the number of carbon molecules per litre, multiplied by the square root of the weather.

But now it has been claimed that the price of petrol is based on oil executives all agreeing to charge the same large amount of money.

Julian Cook, professor of price deciding at Roehampton University, said: “We can’t rule out ghosts just yet, but the idea that the price could be based on whatever they all want it to be is worthy of further inquiry.”

But Professor Cook said that any price fixing by the oil companies would have been incredibly complex and would have had to involve three key factors:

The desire to make vast amounts of money;

Unbridled contempt for the public;

And a series phone calls or emails.

He added: “At this stage it is no more than a theory that these three factors could even co-exist.

“For the time being, always remember to carry your your anti-poltergeist triangle.”