Ministers want to water down beer, wine and spirits amid warnings that Britain is now too drunk to keep its permanent seat on the United Nations’ Security Council.

A government spokesman said: “We should get away with it if we can switch to light vodka and keep a box of Tic-Tacs in our briefcase.

“But we’ve got to do something, it’s getting really obvious. Plus, people keep falling into heavy machinery and polar bear enclosures. It’s a total fucking mess.”

But Roy Hobbs, who has been selling heroin from an ice cream van in Glasgow since 1984, said: “Everyone has what we call a ‘Reality Avoidance Equilibrium’.

“Most of my customers maintain their ‘RAE’ with a mixture of heroin and crack, but there are millions of people who are squeamish about needles and hot spoons and so are forced to rely heavily on supermarkets.

“But if the alcohol is not strong enough to transport you to that special place where everything is just fine, you will need to top it up.”

Hobbs has joined forces with the other drug dealers he has not had killed to develop user-friendly heroin insertion devices that will appeal to his new middle class customer base.

'Buildings' only hope against cold 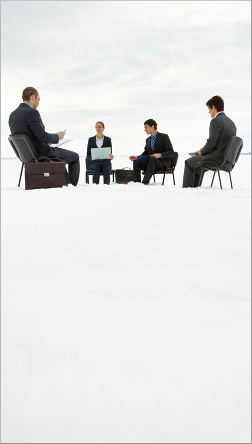 BRITAIN’S only hope for surviving the arctic conditions rests in weather-proof structures known as ‘buildings’, experts have claimed.

A building is a type of shelter commonly made by placing red or grey stone blocks on top of each other with a layer of industrial glue in between.

Buildologist, Dr Tom Logan, said: “Buildings are typically accessible via hinged rectangles. Opening one of them allows the user to ‘go into’ a building. This is because buidings are ‘hollow’.

“Once the rectangle is closed, you create a very definite demarcation between ‘outside’ and ‘inside’. There is no better form of protection from cold weather. They are even better than caves.”

He added: “I predict that sometime in the future it will be common for people to buy or rent buildings that they will then ‘live in’, vastly reducing their chances of freezing to death. Buildings will also be used for work and even leisure.”

He said: “A man called Nikola Tesla successfully harnessed the power of lightning, bringing light and heat without candles or fire. It seems very like sorcery, but somehow it’s not.”

Millions of Britons are expected to die by next Monday due to widespread fear of indoor spaces and silent but menacing radiators.

Teacher Emma Bradford said: “I’m worried by the subzero temperatures because I like to spend my evenings standing on a moor wearing just a vest and pants.