Man finally old enough to go for pint by himself

A MAN has expressed joy at finally being old enough to go for a pint alone and not have anyone question him about it.

Nathan Muir, aged 28, said that since his last birthday he now felt comfortable enough to go into a pub, buy a drink and then just sit at the bar doing nothing in particular.

He said: “I can just sit here, have a couple of pints and be by my fucking self.

“It’s like drinking alone at home only without the feeling of abstract loneliness.”

Research from the Institute of Studies confirmed that anyone drinking by themselves in a pub under the age of 28 is either waiting for someone or on the verge of a nervous breakdown.

“So I’ve bought a pint and some crisps.”

Britons demand to live in medieval village surrounded by a wall 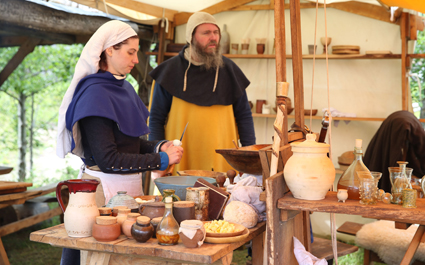 MOST Britons have confirmed they will not settle for anything less than living in a small village surrounded by a high wall.

Members of the public said Brexit did not go far enough and demanded to live in settlements of a few dozen people enclosed by walls with spikes to repel ‘outsiders’.

Sales manager Roy Hobbs said: “We want to live in tiny villages with our own kind and a big wall to keep out immigrants and wolves. It’s the only way forward.

“We won’t need the EU because we’ll trade with ourselves. If you’ve got apples and your neighbour’s got leeks you’d just barter, although I’m not sure how you’d buy a new laptop.

“The main thing is the wall will keep people out. It’s not racist to want to protect the blacksmith’s job or stop gangs of young men molesting your chickens.”

Pensioner Mary Fisher agreed: “I’d like to live in a village with a wall because I’ve chosen to ignore obvious problems like no electricity and the fact that we’d all die.

“There’s nothing wrong with wanting to live with people who are like you. Except Linda from the bingo, obviously. She’s a two-faced cow and I’d dob her in for being a witch.”