Across the Anglican, Presbyterian and Baptist communities clergymen with a warped desire for young boys insisted they were 'every bit as degenerate' as their Papist rivals.

The leading protestant denominations are now calling on the media to switch its attention to their dirty record to counter what they claim is millions of pounds worth of free publicity for the Roman Catholic Church.

One Welsh Baptist minister said: "I feel I'm being sidelined simply because I do not idolise the Virgin Mary and go on and on about johnny bags.

"It's typical pro-Catholic media bias. I wonder if people would pay more attention to my desperate acts of filth if there was some kind of Baptist Pope in Swansea."

He added: "A lot of these Roman Catholic chaps are frustrated by their celibacy and then channel it through their acts of vile depravity. But I've got a wife I can have sex with – I don't even need to do this. That's got to count for something."

But a Vatican spokesman rejected the protestant claims adding: "It's often said that there is no such thing as bad publicity. But there is, and it's this."

Meanwhile people calling for the Pope to resign have been reminded that he is not a football manager.

Theologian, Professor Nathan Muir, said: "The authority of the Roman Catholic Church is, to a very large extent, based on the concept of apostolic succession and infallibility of the Papacy. That means that if he's wrong, then it's wrong and if it's wrong then God's wrong. And I'm not paid enough to get involved in that kind of shit."

Ryanair Passengers Pay Extra &#163;10 Not To Be Blown Out Of The Sky 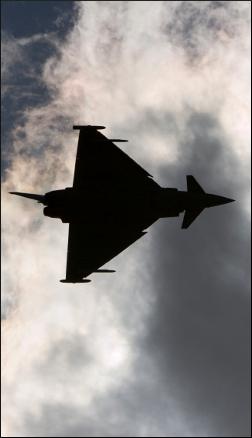 RAF fighter jets are being scrambled on a regular basis as part of a Ryanair scheme to make passengers pay a £10 surcharge for not being killed.

The company said rising fuel costs along with higher taxes and increased landing fees had forced it to extort an extra tenner on pain of fiery death.

Bill McKay, a passenger on board a Ryanair flight from Stansted to an airport about 200 miles from Rome, said: “About 10 minutes after take off, the pilot and his crew appeared in the aisle wearing parachutes and told us that if we did not cough up ten quid each an RAF Typhoon jet would fire something called an AMRAAM missile at us.

“There was a burst of laughter, but then the atmosphere changed as you could see people thinking to themselves, ‘fuck me, this is Ryanair’.

“The pilot then told us to look out of the right hand side where we would see Flight Lieutenant Julian Cook from 3F Squadron at RAF Coningsby.

“Sure enough there he was, flying alongside. He waved at us very cheerfully and then dragged his finger across his throat. And then he waved again.”

Passenger Tom Logan added: “The pilot said that unless we handed over the money the plane would descend to 20,000 feet where he and his crew would all jump out. Flight Lieutenant Cook was there just in case any of us got the idea that we could land the plane ourselves while receiving frantic instructions from a sweaty man in a control tower.

“At that point I asked if they took Visa Electron. Which they did.”

A Ryanair spokesman said the new charge had been introduced after chief executive Michael O’Leary got bored during a film.

The spokesman added: “He still thinks we should destroy at least one plane load of passengers just to prove we’re not to be trifled with.”