Some people not into football

A SMALL number of British people are not responding correctly to football, it has emerged.

The Institute for Studies believes it has identified a sub-group that is not only indifferent to football, but in some cases actively dislikes the game.

Professor Henry Brubaker said: “It had long been accepted that some women and homosexuals struggle to engage with football, but it’s hard to understand how a straight man might malfunction in this way.”

The phenomenon of ‘ball-deniers’ emerged when Roy Hobbs passed through his village summoning all males to the pub to watch an important match.

Hobbs said: “He refused to join us. Looking over his shoulder, I could see that his television was switched to a non-sport channel. I didn’t understand.”

Hayes, who has been quarantined in the Institute for Studies’ laboratory, said: “I just struggle to identify emotionally with these men and their leather sphere. Perhaps it’s because I’ve never met any of the players. They feel like strangers to me.

“Please take these electrodes out of my nose, I think they’re touching my brain. Is my family safe?”

Professor Brubaker said: “Hayes claims to be naturally ambivalent to football. Clearly this is impossible. On some level, even if he doesn’t realise it, he’s being spiteful.”

Theresa May covered in tags 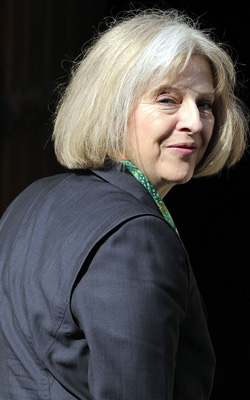 According to a new report, offenders are circumventing their curfews by surreptitiously slipping their tags onto boring people who don’t go out of an evening.

Tory politicians are apparently a prime target for the tags, as are agoraphobics, librarians, members of historical re-enactment societies and anyone who has reached level 80 or above on World of Warcraft.

The Home Secretary only realised she had been a target when police officers raided a Conservative fundraising event searching for sixteen juvenile car thieves. It is now believed the teenagers fixed their tags to May after diverting her attention with a plate of raw meat.

May said: It was very embarrassing for my guests; respectable businessmen and newspaper proprietors who for some reason were convinced the police had come to arrest them.”

The incident comes shortly after a team of 20 officers flew to the West African country of Togo chasing a gang of street thugs who turned out to have attached their tags to the sparrow-like migratory tree pipit.

May also announced a plan to monitor UK internet use which assumes that any users who dont access pornography are fanatical Jihadis and automatically passes their details to anti-terrorism units.