ENGLAND has told the English Defence League that they can stop trying to defend it.

The ancient nation is embarrassed that other countries think it needs the help of some scrawny, misspelled tattoo wearers who reek of chip fat.

England said: “If the EDL really wants to defend somebody I’m sure Wales could do with all the help it can get.

“And ‘wdl’ is actually the Welsh word for an undescended testicle, so that dovetails nicely.”

England has also asked the RAF to drop EDL members into Afghanistan so they can fight all the Muslims they want while being cut to pieces in a hail of bullets.

The specimens will be enticed into the back of a Hercules transport plane using a trail of Stella Artois and deep-fried turkey parts. 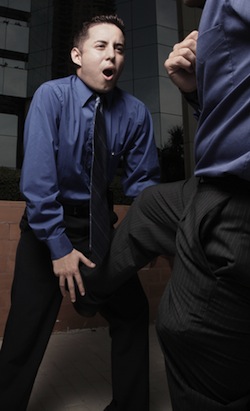 Norman Steele, one of Britain’s leading thugs, said the alleged victims of bollock-kicking  were often unsure whether or not they had been booted squarely in plums.

Steele said: One person may feel theyve been the victim of a crime, another might just put it down to experience and try to avoid being kicked in the bollocks in the future.

If theyre drunk or on drugs, they may not even remember the searing pain, coursing through their groin.”

He added: “People wont like me saying this, but sometimes the victim has to take some responsibility for being kicked in the bollocks.

If you go out wearing tight trousers or cycling shorts, you are definitely sending out the message here are some bollocks – kick them.

If Im at the match and someone shouts Millwall wankers!, clearly he is giving me his consent to mash up his nads.

“But what if someone looks at me a bit funny in the pub, or takes too long ordering a kebab? The way things are going youll need to sign a legal contract before you can batter their testicles.

Nathan Muir, a Crimewatch fan from Stevenage, said: “If someone falls over in the street and then rolls onto their back with their legs slightly apart, how am I supposed to not kick them in the bollocks as hard as I can?”