AS an educator, I believe life should be a constant learning process and so I recently began driving lessons. Unexpectedly, driving has not only taught me so much about how to operate a car, but also about society. In particular, it has opened my eyes to the wonderful world of opportunity which is enjoyed by the disabled, but I must ask: should they really be allowed on the road?

I am a firm believer that disadvantaged citizens should be encouraged to live as normally as possible, and am a massive fan of ramps, Braille and institutions such as 'special' schools. When the cry goes up 'a special kid is dribbling!', it's a happy day when it's in the football sense.

But my curiosity was aroused when my driving instructor was explaining the function of all the car's controls. He missed out a rather prominent lever next to the steering wheel and, as I am inquisitive and eager, I just had to know what it did. He explained that it was for disabled drivers and said nothing more. I couldn't concentrate on the rest of the lesson for trying to imagine how this device worked. Was it for those people with really short arms? Short legs?  Or something else – maybe blind or simple drivers?

Don't get me wrong: I think that mentally challenged people should be allowed to get from A to B as much as the next person, but I can't help feeling that blind people are a hazard to others on the road. And, while I just adore the learning disability kids, I'm a little concerned that when they're driving, it's only a matter of time until they get distracted by something, like a pop song or a balloon.

Put it this way: if I was walking home from work in a blizzard, and Stephen Hawking pulled up in his Jag and said in his robot voice 'Hello, Karen Fenessey. May I offer you a lift?', I would have to reply, as anyone would, 'Stephen, I think it's great that you've written A Brief History of Time which I have read and would give eight and a half out of 10, but I just think that you are not to be trusted behind the wheel'.  Plus, you would have no way of knowing whether he'd been drinking, which is a problem at this time of year.

I plan to quiz my driving instructor more fully about this mystery lever. It surely won’t be long before I'm ferrying Donny and I around our great country which does so much for the weaker members of society. And who knows? If we keep having so many special Olympics, it surely won't be long until all of our loveable friends will be just as quick running or roller-skating to their destinations! 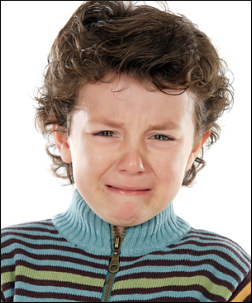 GIRLS Aloud singer Cheryl Cole is to star in a new ITV prime-time show where she stares at children while they burst into tears. 'That's it, keep looking at Cheryl'

Starting in the new year, Cheryl Cole Watches Children Crying will be the network’s Saturday night flagship alongside Ant and Dec’s Piss-Factor and the celebrity jungle show Big Wet Tits.

Producer Julian Cook said: “The child will be placed on a stool in front of a beautifully made-up Cheryl and then the researcher will do something to make it cry.

“Perhaps we’ll tell them their cat is very, very sick or that mummy and daddy are getting a divorce and it’s all their fault.

“And sometimes we’ll just have someone dressed as a blood-soaked zombie who will run towards the child screaming as loudly as possible.”

Cook added: “As the child begins to weep the camera will cut back and forth, keeping an eye on Cheryl as she wells-up, until finally we get the ‘money shot’ and she starts bawling her eyes out. ”

Cole said last night: “Babe, am really lookin’ forward to watchin’ these little kiddies cryin’ like, cause they totally deserve it, they really do. Am so proud of yeez.”

The show will also feature members of the public being stopped in the street and shown photos of a dead puppy in a bucket. Whoever cries the quickest each week will win Â£10,000.

Meanwhile anyone who does not cry will be hounded to the brink of insanity by News International.