Leaving a sinking ship can be the right thing to do, by a rat

IT’S easy to criticise Boris Johnson and David Davis, but as a rat I know the importance of leaving sinking ships. We understand you’ve got to look out for number one and leg it when things go wrong, and it’s great to see so many of our leading Brexiteers prepared to learn from the vermin community.

Some would say Boris is a bastard who doesn’t give a shit about anyone else. But I say – what’s wrong with that? I’ve eaten loads of my friends and I don’t feel bad about it.

The whole loyalty thing is overrated if you ask me. If I have to abandon my terrified family on a damaged galleon it’s no biggie. I’ve normally forgotten about them after 20 minutes.

Anyway, plenty of other Brexiters like Farage scarpered after the referendum and they gave him a radio show. It just seems to be a thing they do.

So let’s not judge Boris too harshly. It’s not as if he’s devastated Europe with bubonic plague, although he probably would if it helped his career.

As a rat I’m quite impressed by the way Tories turn on each other. I think I’d fit in quite well in the cabinet, shafting my colleagues and the poor alike, while wearing a tiny suit like an evil Stuart Little.

But I’m getting ahead of myself here. My point is that abandoning your so-called friends to their fate can be a positive thing, like biting your mate’s tail off in an argument over a tasty cockroach. 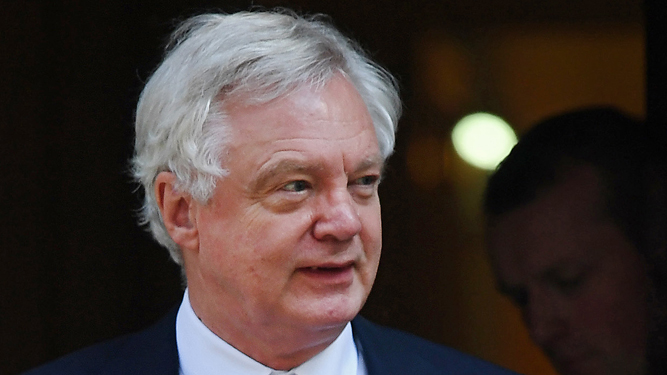 BREXIT Minister David Davis has resigned to work on some exciting solo material inspired by leaving the EU.

Davis claimed ‘artistic differences’ with Theresa May were key to his decision. He said: “I’ve loved every minute of Brexit and of what it has meant to our many, many fans.

“But there just comes a time when you have to go it alone, especially when people didn’t always realise you were the main talent. I’ll start by putting the word exit on the end of everything and seeing if anything sticks.

“Like today I took some cheese out of the fridge and I thought you could call this ‘chexit’. Get some posters done up, have a vote on whatever it is, argue for years about what chexit really means.

“Not saying I’m a genius or anything, but this stuff comes naturally to me. It’s almost like I’m channeling a higher force.”

He added: “I was trying to think of one involving dogs but ‘dogexit’ sounds like a door for dogs and ‘dexit’ is just too vague.”