MPs will today begin the most important European debate for a generation, uniting sceptics across the political spectrum and oh who fucking cares?

Senior Labour sources last night predicted that someone will say whatever it is they are talking about is a really great idea that will not lead to the creation of a European superstore run by cryogenically frozen Nazis.

The Conservatives are expected to accuse prime minister Gordon Brown of getting up at 4am every morning so he can fly to Paris and prepare breakfast for President Sarkozy and his latest dirty sex partner.

A Liberal Democrat spokesman said: "I went to Milan last year. Some kind of Ryanair deal. It was quite nice."

Meanwhile political analysts are at odds over what the important European thing means and whether it is exactly the same as an earlier European thing that no-one bothered to read.

Professor Wayne Hayes, of the Institute for Studies, said: "God, I hate my job. It's so fucking tedious. I wish I'd been a forensic scientist or David Attenborough's cameraman."

However, most agree that whatever the thing is, it could lead to UK foreign policy being decided by sophisticated European types, instead of a sordid collection of traditional British liars.

There are also concerns that moves to create a European super-army will mean British soldiers being forced to eat magnificent food instead of small blobs of reconstituted shit in a bap.

My Balls Are So Huge, Claims Paxman 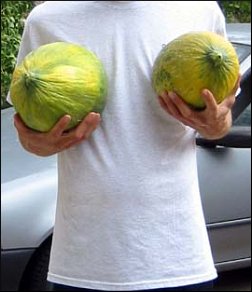 JEREMY Paxman has written to the chief executive of Marks & Spencer to tell him that his balls are huge.

The Newsnight presenter said that although he had always had big testicles, they had become much larger and heavier in recent years, partly because of radiation from being on television so much.

Mr Paxman, 57, said he now needed specially strengthened underwear to be shipped from the former Soviet Union to prevent his balls bumping along the ground.

Writing on his Newsnight blog Paxman said: “I have the heaviest sex parts appended to a man since the birth of Christ.

“Each of my testicles is the size of a honeydew melon and weighs around two kilos, while my penis has often been mistaken for a dog.

“When appearing on television I can rest my cock and balls on the floor, but running for a bus leaves me in agony.”

Mr Paxman used to have his underpants handmade until the young men sent to take his measurements complained to the Health and Safety Executive.

In desperation he turned to M&S and their range of underwear and pyjamas for men with huge cocks and large, heavy balls.

Gok Wan, of Channel 4’s How to Look Good Naked, said: “Jeremy has the finest cock and balls I have ever seen.

“I keep dreaming I'm being choked to death by a sea serpent while he asks me over and over again whether I sacked the head of the prison service.”