FANATICS who use the internet as a platform for militant Scrabulism will be hunted down like wild pigs, the Home Office said last night. Militant Scrabulism has led to a resurgence in the letter Q

Home secretary Jacqui Smith said the government would no longer tolerate this 'twisted interpretation of one of the world's great word games'.

Militant Scrabulism, characterised by its passionate hatred of Western values and harsh treatment of women, is finding hundreds of ready followers, many of them disillusioned young men, brought up on Boggle and Yahtzee.

Scrabulous martyrs are promised 72 heavenly virgins, each of whom conceals a triple word score beneath her flimsy garments.

Scrabulism traces its roots to the fourth century AD, when men would play 'Scra-bel' using a large flat stone and a sack full of small flat stones.

'Scrabble', as it become known, remained unchanged for centuries until the development of a travel version in 1962.

Professor Denys Hatton, of the Institute for Studies, said: "When Scra-bel became mobile, it sent shock waves through Western civilisation that resonate to this day."

Those early fanatics, radicalised by Travel Scrabble and later Countdown, have now given way to a new generation of extremists who use the internet to spread their message of hate.

But Professor Hatton warned against stigmatising the whole Scrabulous community, adding: "There are many liberal, tolerant Scrabulists who are very comfortable with words such as 'cock', 'piss' and 'fanny'."

He added: "There are even a few Scrabulous communities who still stage an annual festival based on the word 'quim'."

William Enjoys Another Spiffing Day Out 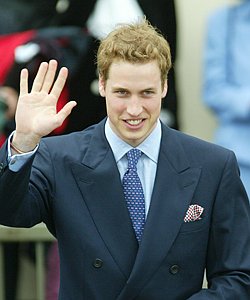 HIS Royal Highness Prince William was in fine spirits last night after another absolutely spiffing day out. 'I'm having a lovely time, thank you for asking'

The future King took off in a light aeroplane and flew it around until he felt like doing something else.

The Prince said it made a 'pleasant change' from the rigours of the Fulham Road or having his foreskin hoovered every morning by the Royal Company of Foreskin Hooverers.

His Royal Highness revealed: "I was worried that flying around might prove to be ghastly and something of a bore. But actually, it was all rather jolly.

"I wonder why people don't use their planes all the time. What is the point of owning one and then just leaving it in your field?"

In preparing for the role of monarch, the Prince will spend a year having really terrific days out with the armed services, before focusing on his main constitutional duty of not being a Catholic.

The Prince added: "Next month they're going to give me a boat with helicopters on it that I get to drive around the sea for a couple of days. That's got 'spiffing' written all over it."

Prince William later spent the evening in Boujis nightclub, throwing bottles of champagne at the wall and urinating into the FA Cup.

He was then driven to Kate Middleton's apartment, where she performed oral sex on him while dressed as Jessica Rabbit.