ALEX Salmond has extended the hand of friendship to Lib Dem leader Nicol Stephen by offering to buy him a beautiful pony named 'Brambles'.

The SNP leader remains determined to form a coalition government and believes a bold act of generosity could bring the 16 Lib Dem MSPs to the negotiating table.

But the Lib Dems greeted the SNP gesture with suspicion last night. A party spokesman said: "Nicol absolutely adores ponies and Salmond is well aware of that. It's a cynical ploy and it leaves many unanswered questions.

But Salmond insisted the offer was made in good faith, adding: "The pony I have my eye on is a real beauty and I know that Nicol will be giddy with excitement just thinking about her.

"Brambles is a lovely chestnut colour and has a delightful temperament. I wish I had one."

But the two Green Party MSPs are understood to be angry at Salmond's overture to the Lib Dems, believing they too should be offered a present before signing up to a coalition agreement.

Patrick Harvie, the Green MSP for Glasgow, said: "I want a scooter. No I don't, I want an espresso machine or a foot spa. Or maybe I do want a scooter."

Mcconnell Barricades Himself Inside Bute House 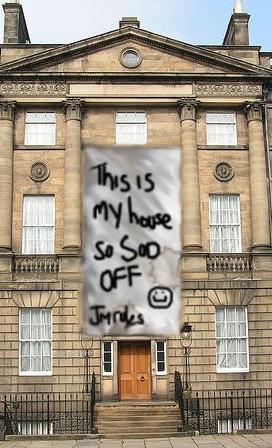 FIRST Minister Jack McConnell has barricaded himself inside his official residence and is refusing to leave.

McConnell has piled furniture against the door of Bute House in the centre of Edinburgh and seems unwilling to relinquish his office, despite Labour's election defeat.

According to a Scottish Executive spokesman the First Minister arrived at Bute House early this morning and ordered the housekeeping staff to leave.

He bolted the doors, locked the windows and dragged the Cabinet table into the hallway to act as an additional barricade.

He could then be heard laughing and singing as he made his way to the second floor.

Half an hour later McConnell unfurled what appeared to be a hastily prepared home-made banner which read: "This is my house so sod off." He completed the protest message with "JM rules" and a smiley face.

A senior Labour source said: "After the election he spent the first 48 hours screaming, pretty much non-stop.

"Then he became euphoric and demanded that we all go to Bellahouston Park for a naked picnic. Jack usually prefers to have his naked picnics at the Burrell Collection, so naturally we became concerned.

"The next thing we know he tells everyone that he 'has a plan' and then he jumps into his car and heads for Edinburgh."

The police have decided on a 'softly softly' approach and will try to negotiate with McConnell rather than smashing the door in and filling the place with tear gas.

Edinburgh University psychologist Dr Wayne Hayes, said: "He seems to have freaked out."