HELLO, I’m Michael Gove and/or Rishi Sunak, and I’d like to explain why it’s vital that you do/do not wear a mask while going in Pret.

As you know, from next week facemasks are mandatory in shops. And some elements of the media have rightly/wrongly assumed that I/my respected colleague was sending the wrong message by not wearing a mask in Pret.

But they are the fools/entirely correct. Because Pret isn’t/is a shop.

No, the Pret A Manger chain can actually not be considered a shop in any way, except by the dunderheads of the press/the Treasury for business tax and VAT purposes.

It’s actually a cafe/uh? so I was perfectly within my rights not to wear a mask/I’m sorry, what? because I was only making a takeaway purchase/I haven’t agreed to this and it doesn’t make any sense.

If you think about it, there’s actually no way I could possibly infect anyone when just popping in for a humous and chipotle wrap/yes there is. Have we run this past Dom? Because it sounds like a Dom thing.

So that’s why my critics were wrong and all takeaway food suppliers are exempted from the mask requirement henceforward/really? Well I guess if Dom says it’s okay.

Now if you don’t mind, I must use the bathroom/yeah, I could use a line as well. 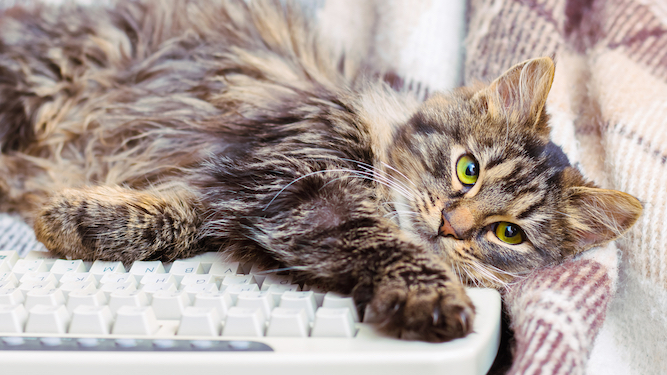 WORKING from home? Your furry prick of a pet treating your keyboard like a dancefloor? Here’s how to get through it:

In an attempt to keep pretending you’re in control, begin by chuckling and exclaiming ‘Not there, kitty!’ as if it’s a joke you’re sharing. Act like it’s just a one-off when deep down you both know this is the new normal.

Why not plead with your cat to do the right thing? It probably understands. Say something like ‘Come on now, this work is what pays for your Lily’s Kitchen Supurrs!’ As it stares back at you like you’re the most pointless thing in the universe, try your best not to look down in defeated confirmation.

Keep lying to yourself that you are the dominant entity in this situation, pick the cat up and put it on the floor. Allow yourself a second of nervous hope that the matter’s settled before the cat’s back up and somehow emailing your boss, ccing in HR.

Decide you could both use a breather, under the illusion that the cat will get bored and instead go and murder a sparrow or shit in the neighbour’s begonias. It leaves and you let out a sigh of relief as you sit back down. Three keystrokes in, guess who’s back?

Speaking to the animal as if it understands or cares, you say a firm ‘That’s it!’ Kick the cat out of the room and close the door behind it. Now try to work through your guilt and shame as the cat mews sadly at the door like a dying child you’ve abandoned.

Obey. Let the cat back in. This is how things are now. Work takes ten times longer, if it’s possible at all. The cat is your master and its additions to your work are just and wise.