LEICESTER City FC has carried out emergency works on its bandwagon following an unprecedented number of passengers.

A spokesman said: “Until recently this bandwagon was half empty on a busy week, but now you can’t even get standing room.

“Some of these passengers are still wearing Manchester United shirts.

“I know everyone loves a winner but at least let us put some decent shock absorbers on this thing before you all jump around singing ‘Glory Glory Leicester United.”

Leicester City will bolster its bandwagon with parts from the now defunct Jeremy Corbyn bandwagon, which has been replaced by a wheelbarrow. 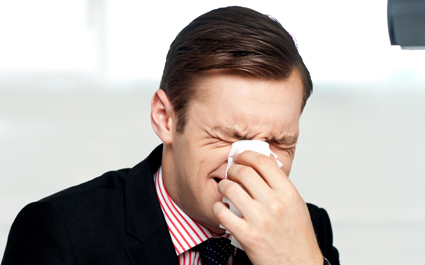 A MALE office worker with a cold is excitedly awaiting clever and funny remarks about how he actually has ‘man flu’, it has emerged.

34-year-old corporate accountant Julian Cook came to work despite having a sore throat and blocked nose because of fears over his job security.

Cook’s team leader Mary Fisher said to him: “From the sniffling it sounds like you’ve got a touch of the old ‘man flu’.

“Do you know what ‘man flu’ is? It’s a joke term for when men get ill and they feel sorry for themselves like pathetic little children.”

Cook nodded to confirm that he was indeed familiar with the term, having heard it numerous times.

Determined to mind his own business for the remainder of the day, Cook kept his head down and worked quietly until a colleague spotted the Lemsip on his desk.

“My boyfriend had ‘man flu’ last week. He even went to the hospital, where they said it was bronchial pneumonia and did an emergency operation to remove one of his lungs. Of course he was just making a fuss.”