PREMIER league footballers have remained utterly ghastly despite their multi-million pound salaries, according to new research.

Experts say the huge sums invested in the country’s top players have failed to alleviate their violent, working class horridness.

Professor Henry Brubaker, of the Institute for Studies, said: “Most remain largely unintelligible and, when not buying clothes or punching people, they sit around on their cream leather sofas, watching Jason Statham films and eating Pringles.

“Even someone like Steven Gerrard, who once had the makings of a gentleman, is unable to resist the lure of sticky suburban nightlcubs frequented by DJs, fitness instructors and moderately successful plasterers.

“And yes, Wayne Rooney does have an impressive wine collection, but only so his dreadful, inarticulate friends will have nice, heavy bottles to smash each other over the head with.”

He added: “Remember those nasty boys in school who were gratuitously violent, foul mouthed, disruptive and cruel? Now imagine them with an annual budget of £5 million.”

The Institute has proposed a block release system where footballers would spend eight weeks a year at Cambridge learning to use George Bernard Shaw quotes instead of stamping on someone’s forehead.

There would also be regular dinners at the Dorchester where players would be awarded points for correctly identifying the dessert fork and then bonus points for not jamming it in someone’s windpipe.

An educated, middle-class footballing trend did emerge in the late 1980s when Everton winger Pat Nevin was seen enjoying ‘Doonesbury’ in the Guardian but ended in 1993 when Blackburn and England full-back Graeme Le Saux was branded a homosexual for using the word ‘eclectic’ in a post-match interview.

Loving This, Admit Israel And Hamas 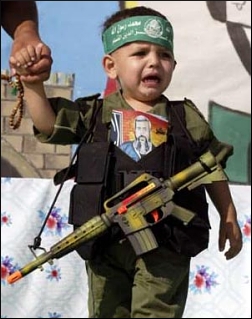 ISRAEL and Hamas last night admitted the latest wave of deadly violence was one of the best they had seen in years.

As the international community condemned Palestinian rocket attacks against southern Israel and the corresponding Israeli air strikes in the Gaza Strip, both sides agreed it was ‘more fun than a barrel of heavily-armed suicide monkeys’.

Israeli prime minister Ehud Olmert said: “You’ve got to hand it to Hamas, they are the dog’s bollocks when it comes to unrelentingly insane terrorist opponents.

“Fatah and Mahmoud Abbas are so sensible and tedious. It’s all talking and protesting and chucking a few rocks once a week. Sure we can flatten a few streets but it’s not the same. Rocket attacks mean you can go balls-out crazy apeshit.

“I just love Hamas. They really get us.”

Meanwhile a Hamas spokesman said: “Hats off to the Israelis, they’ve done it again.

“This is the sort of top drawer, high quality violence that could keep us all going for years and years. Vintage stuff.

“In fact, if I wasn’t a Muslim being attacked by Jews I’d say it was the perfect Christmas present.”

He added: “Imagine if they invade! No, stop, I don’t want to jinx it.”