IN his final salvo of the election campaign Tony Blair has accused SNP leader Alex Salmond of killing the guinea pigs of thousands of Scottish children.

In a letter sent to every child under 12 in the country, the Prime Minister painted a gruesome picture of what life would be like under a Nationalist government.

"As you know the world is full of terrifying madmen who want to do you harm," wrote Blair. "But did you know that one of the worst madmen of all is living in the same country as you?"

"The fact is, Alex Salmond, the leader of the SNP, crept into your house and strangled your guinea pig. And if your mummy and daddy vote for him, he'll kill your cat, your dog, your goldfish and your hamster, because he can't stop himself.

A Labour spokesman justified the hellish campaign message adding: "Little children need to understand that they will face years of heartbreak and trauma unless the Labour Party is dominating every aspect of their lives." 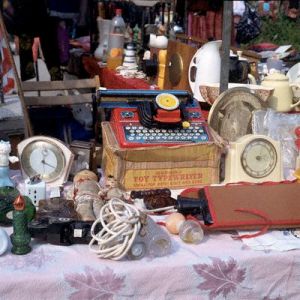 Choice items on sale included a slightly scratched bathroom mirror with some of the famous beauty’s talcum powder still visible on its surface.

A couple of slightly burnt teaspoons and an old leather belt belonging to Moss’s boyfriend Pete Doherty were also quickly snapped up.

A box of funny looking little pipes, also thought to belong to Doherty, attracted a lot of attention, eventually being bought by a wild-eyed and excitable young man.

However, a bunch of Babyshamble’s CDs flecked with vomit proved a harder sell, and now appear destined for the local charity shop.

Fans of the model’s renowned fashion sense were not disappointed either snapping up trademark Moss items such as sheepskin thongs, high-heeled Wellingtons, and vole-skin legwarmers.

Overall Moss declared the sale an enormous success and said all proceeds would be donated to charity, chiefly the local Old Doherty’s Home for Delinquent Drug Ninnies.