SCIENTISTS have discovered a wonder drug that increases women’s appetite for sexual intimacy and fast food.

The magic liquid has so far been tested mainly on hen parties and teenage girls but in both cases they exhibited more mating behaviour and a fondness for chips.

The hen parties in particular sent out classic mating signals including thong flashing and shrieking after ingesting the substance.

Professor Tom Booker, of Glasgow’s Clyde University medical school, said women who had not taken the drug showed a complete aversion to kebabs, or sex with men named Keith.

However, after ingesting the wonder substance most would happily munch their way through a large doner undisturbed while Keith went about his business.

Prof Booker said: “It is truly amazing. It is almost like these people put on a new pair of glasses which change how they see boring badly dressed men with terrible chat-up lines.”

The professor said the amazing discovery was made purely by accident while his department was on work night out.

“At the start of the night we were all involved in a deep and serious conversation about medical ethics.

“We all had a few beers and the next thing I knew I woke up in the department with a kebab as a pillow and my assistant Melissa lying next to me wearing nothing but my Y-fronts.”

The Professor said he was convinced the amazing drug was contained within the beer and wine that had been consumed the previous night.

His team are now setting out to isolate the substance with a view to getting it prescribed on the NHS.

Salmond's Face To Be Projected On To Moon Night Before Election 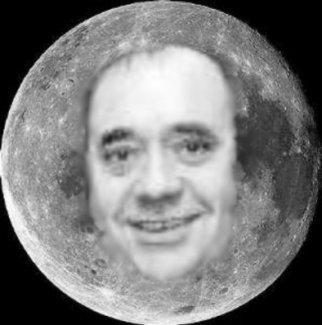 THE SNP election campaign will reach a spectacular climax this week when the face of party leader Alex Salmond is projected on to the surface of the moon.

People across the northern hemisphere will be able to see Salmond's gigantic face from 10.30pm on Wednesday until around 3am the following morning.

An SNP spokesman said: "With around of 40% of voters undecided, what could be more impressive than Alex Salmond beaming down at you from space?

"We think it will give voters a tremendous sense of calm and well-being."

He added: "Obviously we're going to focus-group the whole thing and if the feedback is positive we'll look at projecting the Leader's face on to the moon on other occasions such as St Andrew's Day and Alex's birthday."

Extra police will be on hand in several Lochaber villages where, according to Salmond, he is already worshipped as, "some kind of supernatural astronaut".

"They might think it's the end of the world and start sacrificing whatever or whoever they can get their hands on," said a police spokesman.

"It's probably best if there's a uniformed officer there to reassure them."