A CHIMPANZEE in a Swedish zoo has displayed the distinctly human characteristic of not enjoying being locked up against his will.

Santino, a 31 year-old male, gathers rocks and then throws them at visitors in what scientists say is evidence of him being incredibly pissed off.

Dr Tom Logan, of the Institute for Studies, said: "This is the first evidence we have that chimpanzees, like humans, are not terribly fond of being drugged, kidnapped, flown half way around the world and gawped at by fat, ice-cream covered children.

"In Santino's case he also seems to have worked out that the zoo is a commercial enterprise and that if he can hit just two or three of these porky youngsters in the face, not only will they not come back, they'll tell all their friends and gradually word will spread until the zoo goes out of business and he can make his way back to Africa.

"I wouldn't be surprised if he also has a calendar, a credit card and the flight schedules between Stockholm and Nairobi."

Dr Logan added: "Like a human, he's thinking, 'I'm 31, I should be out there meeting interesting, sexy females and buying my first tree, but instead I'm working for some dreary institute, wanking myself to sleep and sharing a rented flat with a malodorous bastard'.

"Interestingly Santino also displays the distinctly unhuman characteristic of having some kind of vague plan and at least trying to think it all through, instead of just making it up as you go along until even the fucking banks run out of money."

Public Urges Ross And Morgan To Fight To The Death 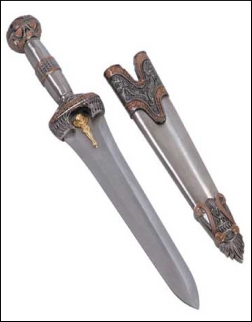 THE vicious feud between Piers Morgan and Jonathan Ross could be settled by a very straightforward fight to the death, it was claimed last night.

As Morgan renewed his attack on the BBC chat show host, millions of people across Britain suggested a fighting pit, bare chests and a pair of short Roman swords known as gladioli.

Duelling expert Martin Bishop said: "The shortness of the sword will require them to fight at very close quarters giving each man a good chance of landing the mortal blow. Better still it will increase the chance of this happening simultaneously."

Members of the public fearful of either Morgan or Ross surviving the contest have called for the winner to take his chances against a trio of ravenous Bengal tigers or, failing that, a Chieftan tank.

Bishop added: "It's not what they would have done in the Coliseum, but it should round off the evening very nicely."

"One can often lose control of one's emotions in such a highly-charged situation but let us at least attempt to get to the heart of this particular matter – you're both unbearable, talentless, overpaid cocksuckers and the fact you're successful makes me want to erase Britain from the map with 100,000 atomic bombs.

"Now get in the fucking pit."