DOGS have pathetically self-indulgent emotions just like humans, it has emerged.

The Institute for Studies found that thousands of years of domestication by man have caused dogs to obsess over vague and trivial emotional problems.

Professor Henry Brubaker said: “Previously we believed that dogs’ barking and howling had some worthwhile purpose, such as warning against intruders. Our analysis suggests they may be simply telling each other about non-problems such as how a local terrier seemed a bit stand-offish.

“In one case, a chocolate labrador complained for several hours about his owner replacing his filthy old red  collar with a new blue one, which he believed was ‘not really him’.

“Similarly, there was a labrador whose comfortable routine included being fed at the table, but moaned about not knowing ‘where his life was going’.”

German shepherd Tom Logan said: “There’s a really nice collie I see whenever our owners stop for a chat during our walks, and I thought we were really bonding.

“Then last Tuesday she completely blanked me and just kept barking at a squirrel. I mean, where do I stand here? Is this relationship going anywhere? Have I misread the situation?”

At this point Logan was dragged away by his owner and told to do a shit. 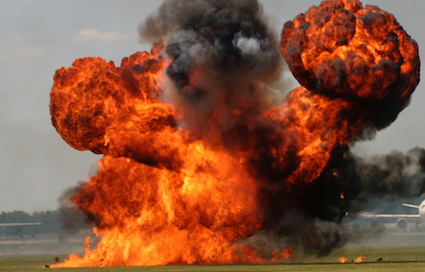 THE unrepentant owner of a Samsung Galaxy Note 7 has said he has lived by the phone and so is not afraid to die by it.

Nathan Muir, who favours the Note range because they are much larger and therefore better than other smartphones, is ignoring advice to turn it off because that would be like death anyway.

He said: “I’m on my phone in the car, in the office, on the train, in bed, in the fucking shower mate. If it goes so do I.

“I always knew the mobile would kill me one day, but I thought it would be something more lingering. An exploding head more than I could have hoped for.

“I love this phone more than I ever loved my ex-wife. I won’t abandon it. Like that Smiths song, ‘to die by your side what a heavenly way to die’.”

Muir added: “Switch to iPhone? You taking the piss? Battery life’s a joke.”